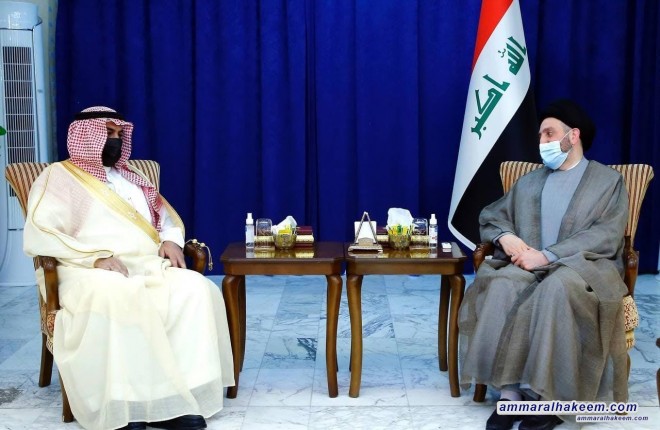 Sayyid Ammar Al-Hakeem, head of Al-Hikma National Movement, discussed with the Ambassador of the Kingdom of Saudi Arabia to Baghdad His Excellency Mr. Abdul Aziz al-Shimmary on Saturday 5/8/2021, the developments of the political scene in Iraq and the region and the bilateral relations between the two brotherly countries. His Eminence referred to the nature of the dialogues taking place at this stage and the role of Iraq in it, lauding the positive language exchanged between Riyadh and Tehran. His Eminence said that dialogue is the best and only way to overcome problems and obstacles, and also showed the nature of Iraq’s entitlements in the next stage, including the entitlement to early elections, their importance and how it will define and determine the political path in the next phase. His Eminence pointed out the need to confront the exclusionary ideology, indicating that ISIS is no longer an existential threat, and all that it seeks is to return to the forefront through some terrorist acts, which requires intellectual and cultural remedies and to exploit the loss of terrorism for its social status.