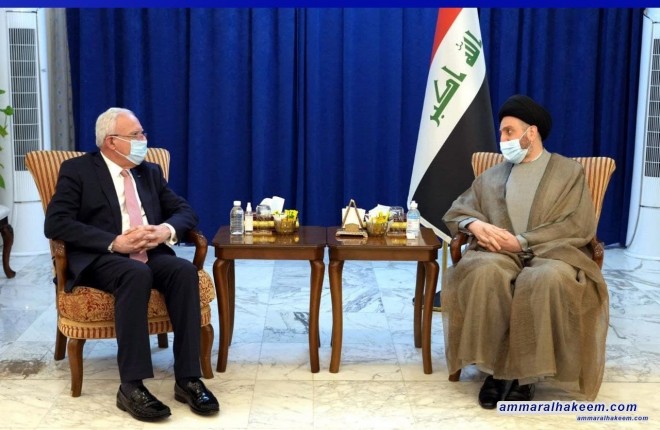 Sayyid Ammar Al-Hakeem, Head of the National State Powers Alliance, received the Palestinian Minister of Foreign Affairs, Mr. Riyad Al-Maliki, together with the Ambassador of the State of Palestine to Baghdad, Mr. Ahmed Aqil, Monday 24/5/2021.
His Eminence listened to the detailed explanation made by His Excellency the Minister on the recent events and his appreciation of the role of Iraq in supporting the Palestinian cause. His Eminence commended the victory achieved by the steadfastness of the Palestinian people in the recent confrontation with the Zionist entity, stressing the need to invest what has been achieved with more internal solidarity. And to concentrate on the confrontation with the Israeli entity and to overcome internal differences. The Palestinian right does not expire by prescription and the first of its priority of demanding this right is to consolidate the internal front and for all powers within it to cooperate.
His Eminence also indicated that the recent confrontation proved that the Palestinian cause is entrenched in the Arab, Islamic and humanitarian conscience, no matter how many crises the peoples are going through. His Eminence renewed his position rejecting normalization with the usurping entity and stated that the Palestinians have the right to a decent, sovereign state, and the refugees' right is to return to their homes.
His Eminence affirmed the support of the Iraqi government, people, religious authorities, and social references for Palestine and its cause, and that Palestine is a matter which Iraqis of all sects and components agree upon.