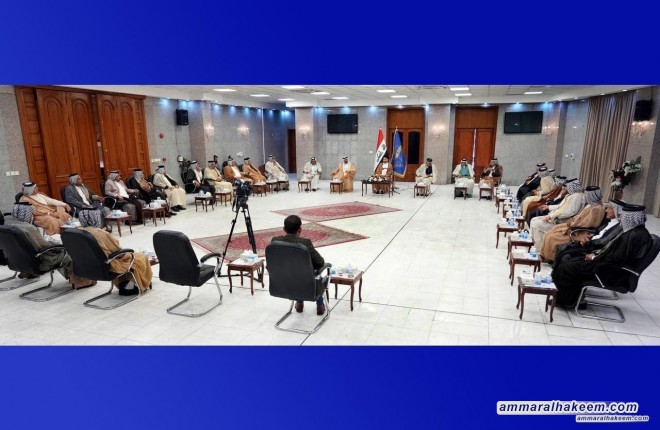 Sayyid Ammar Al-Hakeem, head of the National State Powers Alliance, during meeting several Sheikhs and prominent figures of the tribes in his office in Baghdad on Monday 5/24/2021.
His Eminence referred to the important role of the honorable Iraqi tribes in the present and future of Iraq, stressing the need for Iraq to move from a state of instability to a state of stability after numerous grave challenges that faced Iraqis, that they emerged from victorious.
His Eminence stressed the necessity of holding the next elections on time disregarding the votes calling for postponement or cancellation since this path leads the country to the unknown. Moreover, His Eminence stressed the need for everyone to compete within the framework of the law and away from the language of weapons.
His Eminence called to involve youth in the next stage and empower them as they represent the largest segment and reiterated the importance of listening to them and meeting their demands, explaining that the National State Powers Alliance includes moderate political powers that believe in the strength of the state and to support and strengthen it, and thus achieve stability in the realm of a strong and revered state.