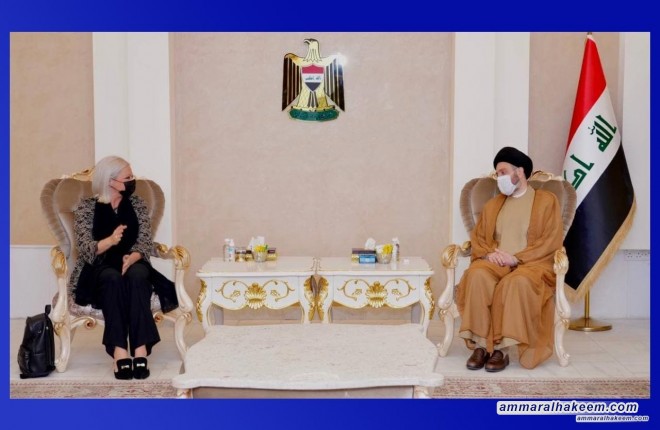 Sayyid Ammar Al-Hakeem, head of the National State Powers Alliance, met the Special Representative of the Secretary-General of the United Nations in Iraq, Ms. Jeanine Hennis-Plaschart. Wednesday, June 2, 2021.
Early general elections and the role of the United Nations in it were discussed during the meeting, as well as adherence to the law and respect for the resolutions of the Iraqi judiciary in settling disputes.
His Eminence restated his firm position that the forthcoming early general elections are crucial and will determine the political path for the next stage, and stressed the importance of broad participation, and for everyone to assume their responsibilities to bring about the desired change and for the language of moderation and median to prevail.
His Eminence stressed electoral security and the provision of equal opportunities for competition among all, calling for confronting political money and campaigns of slander and libel defamation. Indicating the importance of international monitoring of the elections and the need for monitoring to stay away from violating Iraq's sovereignty or involving in its internal affairs.