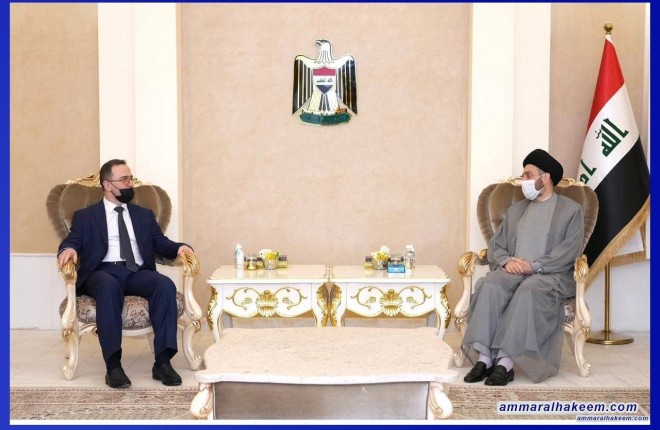 Sayyid Ammar Al-Hakeem, head of the National State Powers Alliance met with the Russian Federation Ambassador Plenipotentiary to Baghdad, H.E. Elbrus Kutrashev in his office in Baghdad, Thursday, June 3, 2021, His Eminence wished him success on his new mission and exchanged views with him on the most prominent cases of Iraq and the region, and the bilateral relations between the two countries.
His Eminence emphasized developing the relations between Baghdad and Moscow on the economic, political, and military levels. “Iraq is open to all in a way that guarantees common interest and preserves Iraq’s sovereignty.” His Eminence added. Concerning the early general elections, His Eminence reiterated that it's fateful and will define the next phase, and pointed out the necessity of competing based on programs, and that the elections must take place in a safe environment for the candidates and the voters in a manner that guarantees the rights of both parties.