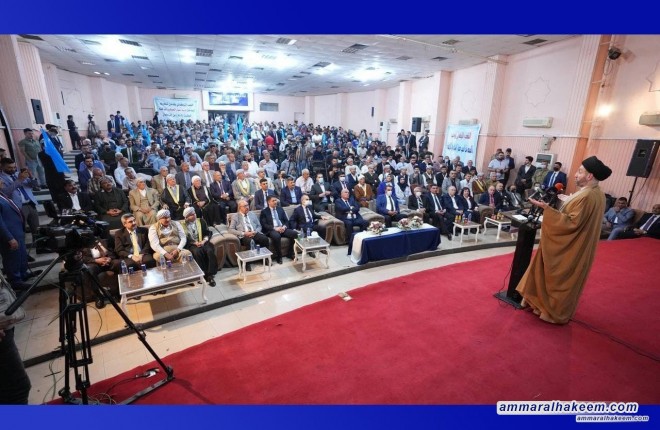 Sayyid Ammar Al-Hakeem, head of the National State Powers Alliance, reiterated his call to consider Kirkuk the capital of Iraqi diversity, and the need to complete legal procedures for this matter. In addition, stressed the importance of the Global Dialogue Center in Kirkuk to benefit from the experience of the people of Kirkuk in coexistence, during his meeting with Turkmen sheiks and dignitaries in Kirkuk governorate, Friday, June 4, 2021.
His Eminence stressed the importance of the Iraqi components to live up to their common aspirations within the framework of the Unified National Identity, reiterating his position on sectarianism and racism, and added that these two cases remained within the political framework only and were never social phenomena.
His Eminence stated the necessity of managing diversity and transforming components into bridges for Iraq to move towards the world, recalling the history of the Turkmen and their martyrs, and calling on the people to follow in the footsteps of their fathers and grandfathers. In addition, His Eminence reiterated supporting the Turkmen component in a just manner through granting them the position of the Vice President of the Republic while indicating the importance of the forthcoming general elections and how it’s going to be the line between the continuation of suffering or its end towards stability, calling for broad, active and conscious participation.