Sayyid Ammar Al-Hakeem: Kirkuk is Kirkuk's identity with all its sects and components 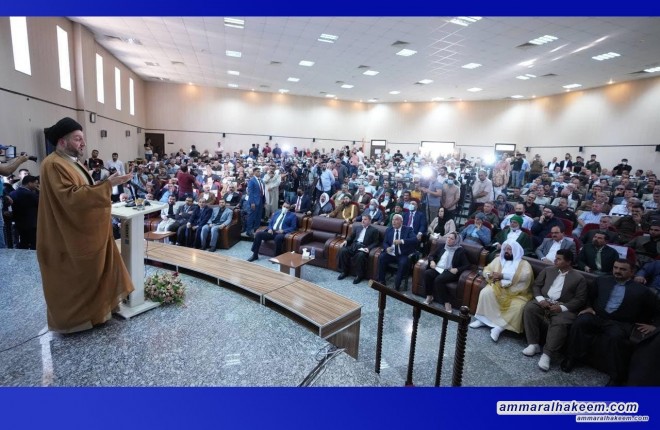 Sayyid Ammar Al-Hakeem met with a group of dignitaries, sheiks, and elites of the Kurdish component whilst visiting Kirkuk, the city of coexistence and harmony, Friday, June 4, 2021.
His Eminence recalled that long history that connects him to them since the reference of Imam Ayatollah Sayyid Muhsin al-Hakim “May Allah Sanctify His Soul” and his triumph for the Kurds and redressing their grievances, as well as the relationship of Kurdish leaders to The Martyr of the Altar (Shaheed Al-Mihrab) and Aziz Al-Iraq "May Allah Sanctify their Souls."
His Eminence showed that the strength of the Kurds and the rest of the components lies within their cohesion with each other within the framework of the national identity. Calling on the Kurds to adhere to their identity, culture, language, and costume, as well as the rest of the components.
He pointed out the need to deal with all the provisions of the constitution without selectivity, as the constitution takes into account the interests of all.
His Eminence emphasized that Kirkuk is the identity of Kirkuk with all its components and spectra, and success in it is a success for Iraq in harmony and unison. In addition, stressed the importance of dialogue to overcome differences, calling for the adoption of a flexible language away from breaking wills, as well as showing the importance of the general elections and their outcomes in finding a reassuring equation for all that maintains balance.