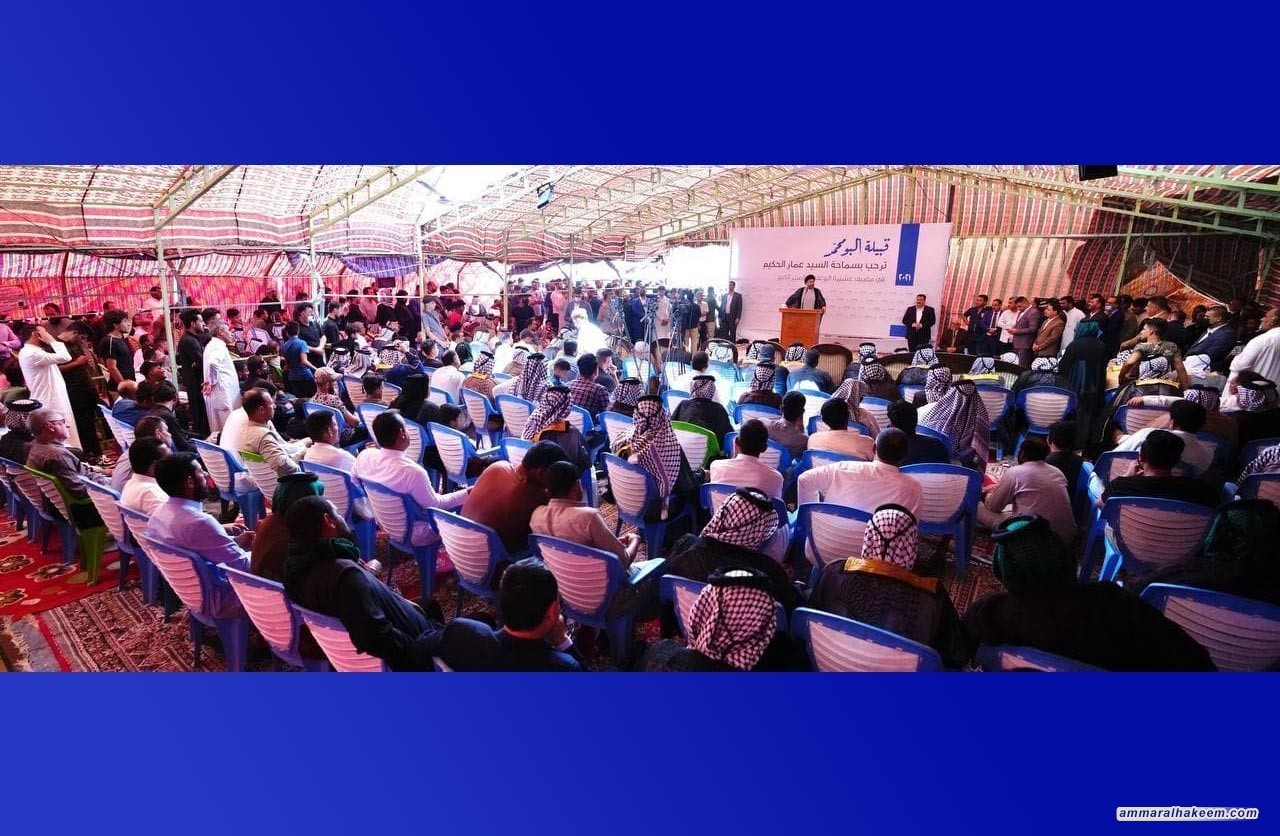 Sayyid Ammar Al-Hakeem, head of the National State Alliance, considered societal awareness and realizing the nature of the challenges as a road map to get Iraq out of its crises.
His Eminence, Hosted by Al-Bu Mohammed tribe, the guest place of Al-Bu Ali tribe, the guest place of Sheik Walid Khalid Al-Salman, Thursday, June 10, 2021.
There H.E. said that The solution to Iraq's problems lies in finishing the building of a strong and capable state, defining three tracks to achieve this goal, starting with the independence of the Iraqi decision. After that, achieving stability, and then the third track is achieving development and prosperity.
His Eminence stated, in his speech, that societal awareness and awareness of the nature of the phase represent a road map to get Iraq out of its crises. The awareness of society results in a strong state and effective institutions in providing services, combating corruption, providing job opportunities, and blocking the path to foreign interventions.
His Eminence said that the tendency towards the national product must be It starts with the Iraqi national decision. Which has to take into account the Iraqi interest in the first place. His Eminence affirmed his vision of the nature and diversity of Iraqi society, and that Iraq is a nation of multiple peoples that fuse into one nation and that will remain under the banner of Allah the Greatest (the Iraqi flag), stressing the importance of a strong state that looks after the welfare of the Iraqi nation and its diversity, equal opportunities among its members, the rule of law, and institutional work for all, and the importance of timings accompanying solutions. “We must know the ends as we know the beginnings.” His Eminence said.

H.E. referred to the tribal reality in the city of Maysan and the role of this community institution in defending Islam, the homeland, and the religious authority, calling for a tribal and societal charter of honor that protects capital from extortion and pressure and allows more of it to flow. Iraq in general and Maysan, in particular, is a virgin land waiting to be invested. “however, we have to provide the ideal environment for this, as we explained the need for the sheiks of Maysan to have the greatest role in eliminating tribal conflicts.” pointing out that the use of force in this way in some conflicts is not innocent, and engines and nutrients are driving it, that we must beware of. The arms of the tribes were always direct towards the enemies of Iraq and its people.
His Eminence called for a political charter of honor that keeps services away from the political scramble, as providing services is a gain for all. Including the political forces, regardless of the subordination of those responsible in this province or any other. Stressing the importance of reassuring and balanced outcomes so that Iraq can move to the phase of stability and thus construction and prosperity. bearing everyone the responsibility for making a good choice and considering the behavior of the candidates concerning the money spent or exaggerated promises, and he also stressed broad, active, and conscious participation.
His Eminence said that the stage requires understanding the nature of the international will that has begun to move towards supporting Iraq and ending its suffering, citing the regional and international roles of Iraq as well as the messages launched by the Pope's visit, calling for standing up to these changes and investing the phase to put Iraq on the right path and launch it towards prosperity and stability.