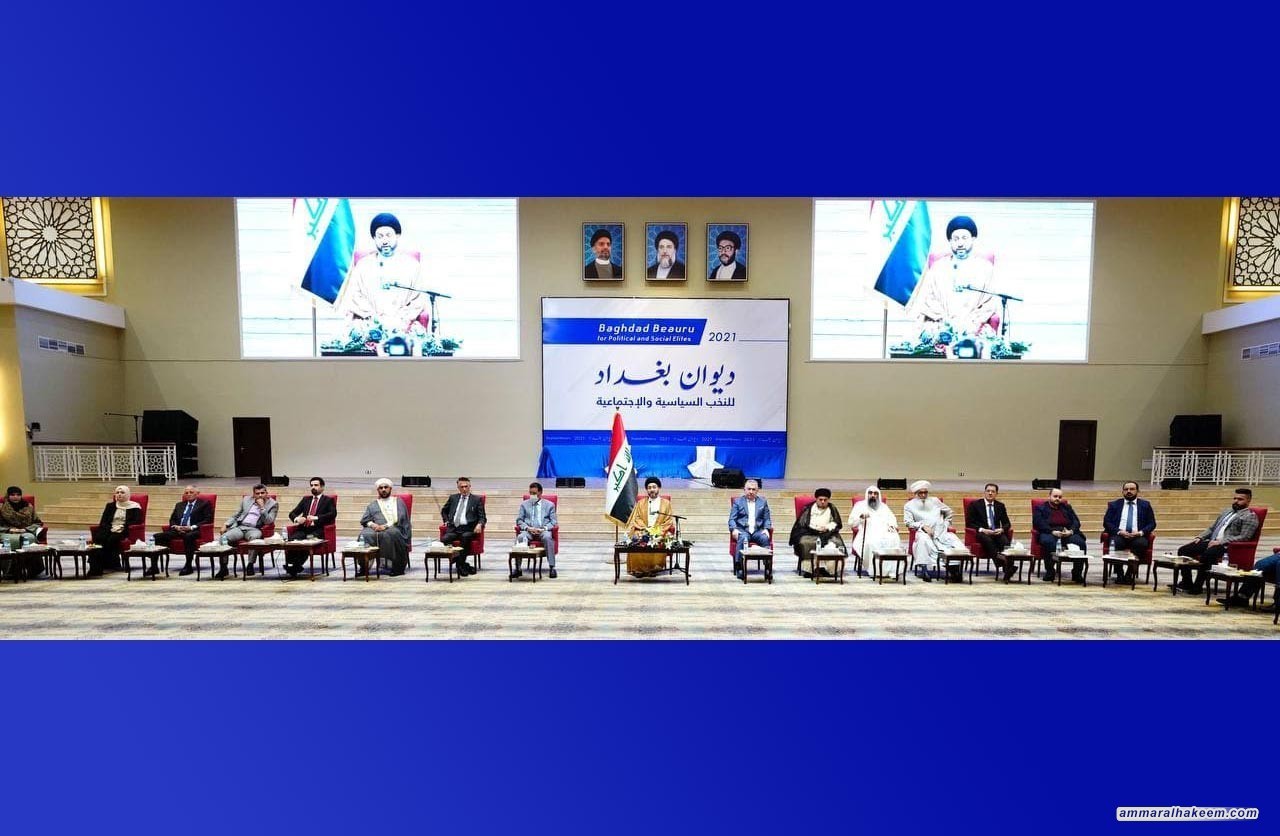 Sayyid Ammar Al-Hakeem, head of the National State Powers Alliance, met with several elites and competencies, within the activities of Baghdad Beauru for Political and Social Elites, on Saturday, June 12, 2021, and exchanged their views on the national general concern and the upcoming entitlements, especially the early general election and what is being said about it.
His Eminence stated that the upcoming election is far more dangerous than The 2005 election, for several considerations, including that the first worked to establish democracy, and the next one will work to consolidate it and establish a new phase, indicating that the reality of political powers and the citizens’ good opinion of them was an important factor in 2005, which became different in the forthcoming general election, and considering the forthcoming election, a crossroads between stability or keep the situation as is and face new challenges. Indicating the solution is a need for the outputs to be balanced and expressive of the independent Iraqi decision, identity, and the independent Iraqi interest.
His Eminence pointed out that the Pope's visit and the dialogues that Iraq is witnessing between the various factions in the region are an indication of Iraq's restoration of its regional and international position. This shows that the region has left the era of nightmares and fears of the Iraqi reality. In addition to stressing that supporting this will follow the results of the elections. Either stability or facing new scenarios of violence and escalation, noting that the difficulty of the next phase does not lie in the electoral practice at the moment as much as it is related to the post-election phase, so everyone should release messages of reassurance and move to a political decade to reach stability, reiterating the need for a comprehensive national project.
His Eminence confirmed the philosophy of the political system in Iraq is based on considering diversity as a path to patriotism, which requires moving from the era of respecting diversity to the era of managing diversity and for the components to be Iraq’s bridges towards peoples of their own in the world. And calling for recognition that the Iraqis are a nation of multiple peoples within a unified national framework. And renewing the call for a new social decade that notes the variables of the phase and involves those who did not participate in the formulation of the previous decade in making the future of Iraq without wronging the previous phase, for the previous decade was a product of its environment and conditions.
His Eminence said, "There is no postponing the elections. Other than that, are just wishes and hopes. The forthcoming general elections are supported by a political will to hold them on the specified date. as well as the international will and the international role in supporting Iraq to hold the elections on the specified date. And expressing his belief that the government is serious about holding the elections on time as it is the sole reason for their formation.” In addition to restoring the prestige of the state, pointing out that the legitimacy of the political system and its assimilation into society is measured through broad participation in the elections. The more people that take part in the elections the more it expressed the society and its aspirations. H.E. believes that broad participation must be accompanied by awareness and to be active well as the participation rate is proportional to balancing the outcomes.

His Eminence expressed his belief that boycotting the elections is a wrong measurement, and that electoral security is not the responsibility of the government alone, but rather the responsibility of the political powers and the responsibility of the elites in creating electoral awareness to limit the effects of money, weapons and the language of intimidation and threat. Stressing the security of candidates and cybersecurity through the inspection company and the creation of more than one oversight window to monitor the elections without interfering in the management of the electoral process and violating the sovereignty of Iraq. H.E. called for sending messages of reassurance to activists who are outside Iraq, so society must return to its cohesion, and international monitoring is required because of the societal division and its impact on the elections without violating Iraqi sovereignty, holding the elites responsible for addressing negative generalizations. While stating that part of this impression goes back to the political scramble and the mutual political defamation between the political powers, which made everyone fall short and the scene be dark in the eyes of the citizens.