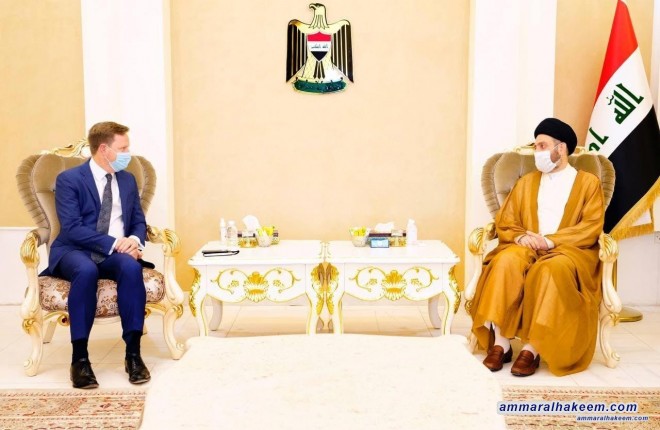 Sayyid Ammar Al-Hakeem, head of the National State Powers Alliance, discussed during his meeting with the British Ambassador in Baghdad Mr. Stephen Hickey the latest political scene developments in Iraq and the forthcoming elections entitlement, noting the importance of developing the relations between Baghdad and UK and stressing that it is imperative to sustain relations on every level, as well as investing Iraq’s desire to open up to everyone to serve the interests of both countries and respect Iraq’s sovereignty.
H.E. illustrated his vision towards the forthcoming general elections, stating that it’s vital and fate-defining. We invite the international community to support Iraq in its endeavors, as Iraq’s stability means regional and global stability.
H.E. expressed his rejoice towards the regional roles that Iraq assumed to converge the views within the framework of restoring Iraq’s regional and global status and to invest its diversity, history, and potentials to support the regional stability path.