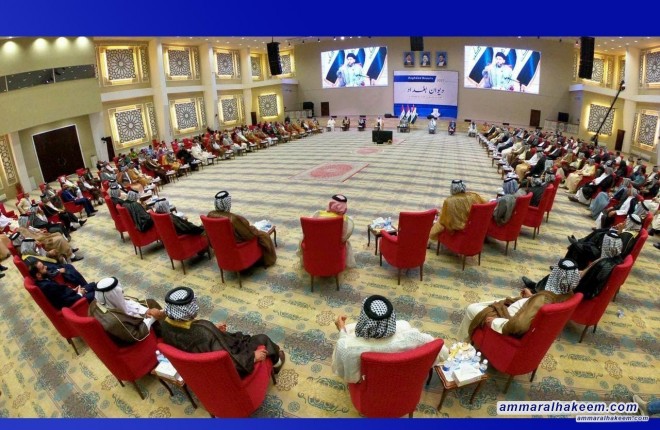 Sayyid Ammar Al-Hakeem, head of the National State Powers Alliance, met with a group of Iraqi tribes’ sheiks and dignitaries on Saturday, June 19, 2021, within the activities of the Baghdad Bureau, and discussed with them the national concern and the political, social and economic reality. Tribes’ weapon was always under control and directed against the enemies of Iraq. Putting an end to the excessive use of force, sometimes for simple reasons.
H.E. put the responsibility of this alienated phenomenon on the dignitaries and tribes’ elders. Pointing out that the Iraqi tribe guest place has always been a station for resolving disputes, overcoming problems, and a societal safety valve. The tribal sheiks are community leaders and influencers, and they must reset the rhythm in line with the aspirations of the community in a safe and stable state.
H.E. once again renewed the call for a national political charter and a tribal national charter that provides a safe environment for investment and service projects so that job opportunities are available and the community shows the signs of development and advancement.
His Eminence stressed the need for the state to enforce the law for a societal cover, and this societal cover is the responsibility of the tribes’ elders and the responsibility of the political blocs and all social activities, and it is imperative at this phase to encourage the security services to apply the law on everyone. Societal safety begins with tribes assuming their responsibilities facing the challenges.
His Eminence reaffirmed his vision for the next phase that Iraq is facing a historic opportunity for stability, ending the era of suffering, and investing the international and regional will on the condition that the election outcomes must be balanced and to take Iraq’s interest as a priority. At the same time, we must invest in the important countries being concerned with their internal affairs. His Eminence said, “The reasons of those who advise not to take part in the elections and those who say that elections aren’t going to change anything, cannot be accepted. as this is not in the interest of citizens at all, but in the interest of the powers that have an organized audience, so every influencer should urge people to participate broadly, actively, and consciously.” just as the political powers and their audience are part of Society and cannot be overlooked, stressing that electoral security is the responsibility of everyone, including the government, and the electoral boycott is one of the most dangerous things that Iraq may face in the next phase, indicating that the management crisis is a common margin in all Iraqi sectors and we need radical treatments in certain issues, that includes electricity.