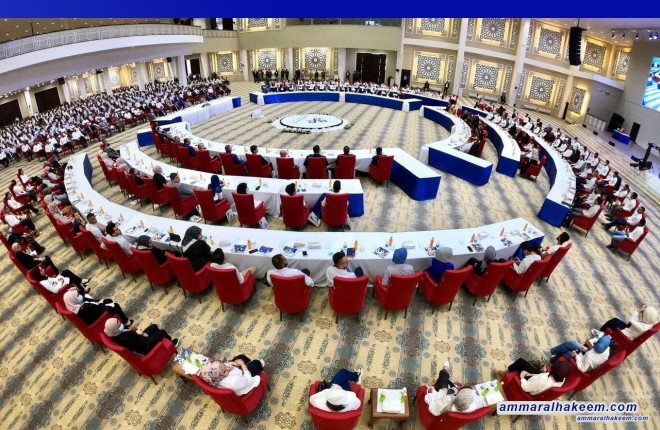 His Eminence Sayyid Ammar Al-Hakeem, head of the National State Powers Alliance, during the second annual conference of the Students’ Zeal Gathering, today, Saturday, June 26, 2021, praised the role of students and youth in building and supporting the Iraqi experience.

His Eminence indicated that the youth of Iraq are distinguished by their high determination and high levels of intelligence, and they are the hope of the nation, and they must know their worth. Iraq needs its youth energies to suit its massive population size. "Aim high for your dreams and set your ambitions big." His Eminence Addressing the youth, noting that preoccupation with the public interest provides both public and subsidiary interests, so we must dream of the unified, inclusive Iraqi dream to build the present and the future. H.E. stressed the need for correct understanding, serious will, and fate-defining decision. This trilogy represents the applied mechanism for reform, indicating also the importance of reading the strengths and weaknesses of our country to start from a firm and insightful vision.

His Eminence emphasized the unification of national wills and to take pride in our history, civilization, ambitions, and dreams, reiterating the call for the formulation of a new social pact and a balanced equation between individual interests and the collective national interest to reach stability.

His Eminence called on young people to be creative, steadfast, and strong leaders and to take the initiative, addressing the youth by reminding them of their history, civilization, symbols, martyrs, and their inheritance of all those symbols and sacrifices.

Conscious openness to foreign cultures, immunization of oneself from foreign cultures, pride in history, and a seamless, safe, and balanced openness, as Iraq is part of the world as a qualitative addition, not a statistical number. His Eminence added.

His Eminence called on the youth to partake in the general elections and to triumph for the state’s approach, moderation, and stability, indicating that the upcoming elections will present many opportunities for Iraq provided that it will be well exploited. Iraq after 2021 is different from the past, and we have to triumph for our people, their interests, and their future.

His Eminence stressed the need to support the Iraqi decision and the Iraqi equation, invest in the positive reality, strengthen the state’s approach, which indicates internal stability, and focus on reconstruction and services. here comes the role of the youth in transforming the popular mood into a popular will for change.