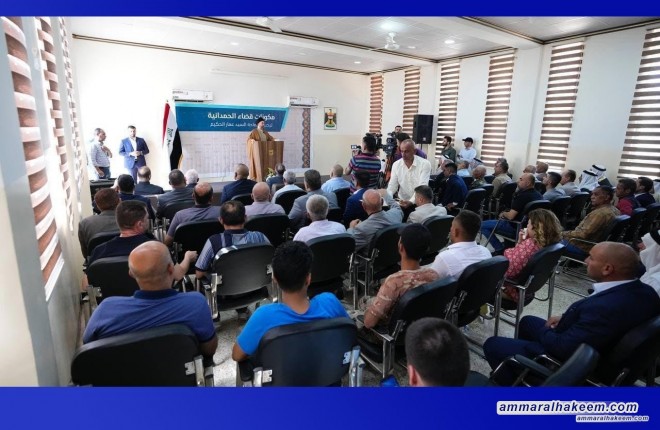 Sayyid Ammar Al-Hakeem, head of the National State Powers Alliance, called to spread a culture of tolerance and coexistence and to open a new chapter for the aspirations of future generations, and to focus on and spread the positives, whilst visiting Al-Hamdaniya district in Nineveh Province, and meeting with a group of judicial constituents, today, Friday, July 5, 2021.
His Eminence praised the heroic images painted by the people of Nineveh in defending their land, holding on to it, reconstructing it, and restoring life to it. Stressing the need to prepare programs to remedy souls and wounds, saying: The challenges that Iraq faced goes in line with its status and role throughout history and the extent of its impact on events.

His Eminence showed that the elections are decisive and fate-defining, and everyone should assume their responsibilities in entrusting the competent who can formulate the equation of balance, stressing the investment of the world’s race towards Iraq, saying: This can only be achieved by a reassuring equation, warning against the opposite, as it will mean more instability and chaos.

His Eminence indicated that the public's support for the political system is evident through the percentage of participation in the elections, and if any of the components of Iraq exits, this will mean a loss for Iraq, while stability and improvement of situations will help to return the expatriate Iraqis.