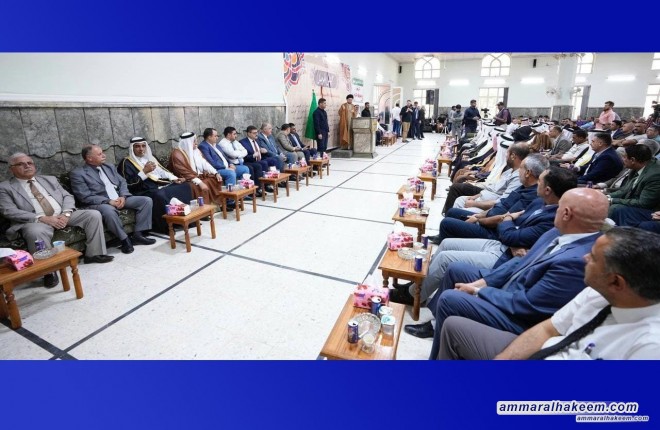 Sayyid Ammar Al-Hakeem, head of the National State Powers Alliance, confirmed that Mosul is a miniature Iraq, and respecting sub-identities and giving them the space to express themselves is a priority for community stability. Adding, the existence of the unifying national identity of Iraqis, and respect for privacy contributes to building the national identity, during his presence in the Mosul Council and Al-Hayaliyyin Al-Hasaniyyin, as part of his tour in Nineveh Province, today, Saturday, July 3, 2021,

His Eminence indicated that building the national identity and leveling up to the Iraqi interest will lead to building the Iraqi nation, and then building the capable Iraqi state in which everyone will remain under its umbrella.

His Eminence explained that our problem does not lie in money or human capabilities, but the absence of a state. Therefore, we presented the concept of state and non-state and the importance of knowing the difference between the two approaches.

His Eminence stressed the need to search for variety to achieve diversity and to make variety a starting point for achieving diversity, saying that the transitional phase is a natural product of the transition from dictatorship to democracy.

His Eminence showed the nature of the cross-component alliance, which eliminates all sectarian or racist discourse and makes competition based on programs, describing the existence of hundreds of parties as political chaos.

His Eminence warned against some insincere calls for reform, calling to investigate the backgrounds of those who spread them for sometimes the demand for integrity is a louder voice to provoke others than it is to extract people’s rights. H.E. also called on elites to assume their responsibilities in urging people to participate in elections as a right for every voter, as change comes in batches, not all at once.