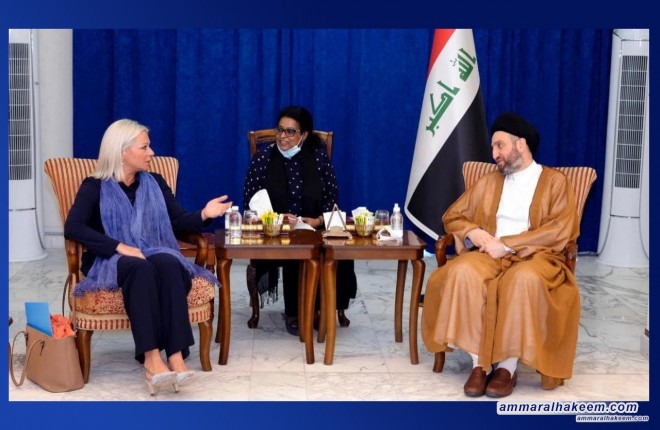 Sayyid Ammar Al-Hakeem, head of the National State Powers Alliance, received the Special Representative of the Secretary-General of the United Nations, Ms. Jeanine Plasschaert in his office on Thursday, July 22, 2021, and reviewed and exchanged views on the developments of the political scene in Iraq and the UN’s role in the forthcoming endeavors, especially the early elections,
His Eminence indicated that the early elections are a response to the popular demand as an outlet for the political tension that Iraq experienced during that period. Therefore, adhering to the specified dates on October 10 is a necessity. H.E. called on the United Nations to facilitate the task of international monitoring to give a transparent impression of the nature of the electoral practice.
His Eminence stressed the importance of competing based on programs and providing electoral security. The candidate and voter must be allowed to choose and express their opinion and urged everyone to educate the public on the importance of electoral practice and its role that will give the desired change.