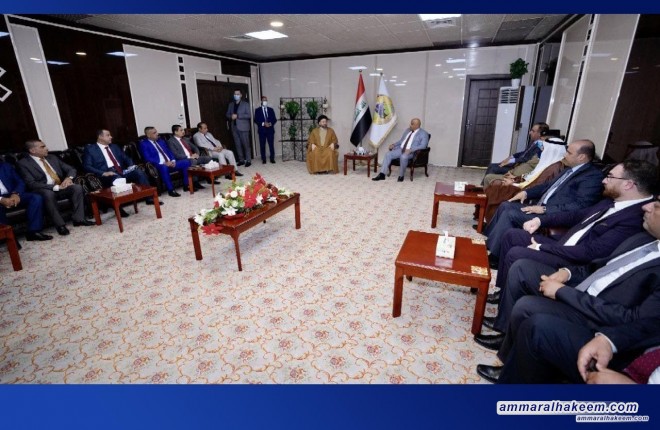 Sayyid Ammar Al-Hakeem, head of the National State Powers Alliance, arrived in the city of Tikrit as the first stop of his visit to Saladin Province. Upon H.E.'s arrival, he met the Governor, Dr. Ammar Al-Jubouri, and the directors of the service and security departments in the province on Sunday, July 25, 2021.
His Eminence stressed during his speech that Saladin is an important station in the history of Iraq and has lived through several transformations, praising the great effort made by the province in reconstruction and peaceful coexistence, stressing the need to open a new page and take lessons from the past, indicating that the Iraqis have no one but themselves and no one can cancel the other.
His Eminence pointed to the need to turn the challenge into an opportunity, as well as the existence of an active and influential youth class that represents 70 percent of the Iraqi society, whose positivity lies in the fact that it does not bear the past decade or political sensitivities. H.E. praised the Iraqi society’s rejection of sectarian discourse, saying, “Sectarianism is the commodity of some of the political class that subsists on it for electoral gain here or there. It is a commodity that doesn’t bring people around, and this is a great transformation and maturity in the level of awareness,” indicating that the priority of the people now is to obtain services after the priorities of the previous phase, which was at the forefront of security and stability.
His Eminence stressed the need for political harmony within the province between its parties and components, and we called for rules regulating the relationship between political powers so that they reflect positively on the provision of services by creating a suitable environment for them.