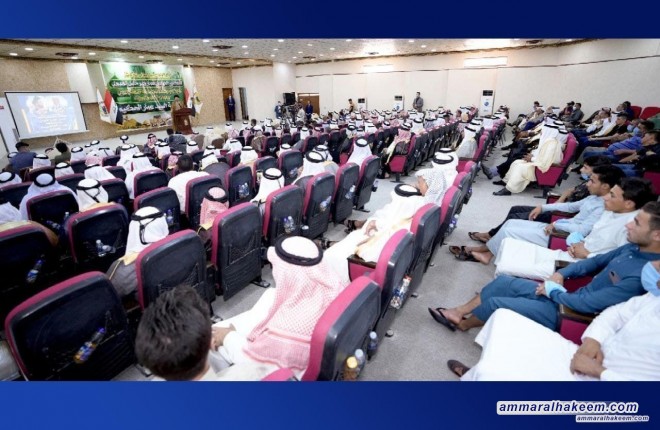 Sayyid Ammar Al-Hakeem, head of the National State Powers Alliance, met in the city of Tikrit in Saladin Province, a group of sheiks and dignitaries of Iraqi tribes on Sunday, July 25, 2021, where His Eminence stressed the importance of communication and perpetuating visits between all parties because of its content-saturated social message, praising the role of the tribes of Iraq as a social institution, indicating its importance in preserving society and resolving disputes that may take years in the courts and the corridors of the judicial systems.
His Eminence indicated that the tribes remained coherent despite the attempts of some regimes to manipulate it and present and delay its characters, pointing to the importance of building the unifying Iraqi identity as a tent for all the sub-identities in Iraq, and said that the collective identity is consolidated through preserving the sub-identities and allowing them to express themselves, their culture, their heritage, and their heritage, not by ignoring them. and work to cancel it.
His Eminence stressed the importance of managing diversity in Iraq, as it represents a source of enrichment, as we need all the components of Iraq so that the bridges of Iraq extend towards their counterparts throughout the region and the world, adding, “Iraq is a nation that brings together multiple peoples within the framework of a united Iraq, and the logic of the nation is a Quranic logic and it is a foundation for acquaintance and integration in light of respect for sub-identities and the rule of law, stressing the need to overcome differences and not drown in past events and start from the present to build the future, stressing the distinction between the logic of the state and non-state.
His Eminence said that building a capable state is the most effective solution to all of Iraq's problems, and drew attention to the need to invest in a positive international and regional vision of Iraq, calling for conscious, broad, and effective participation in the elections. H.E. emphasized that everyone is responsible for the change, as H.E. explained that change is gradual and that broad participation expresses the legitimacy of the political system.