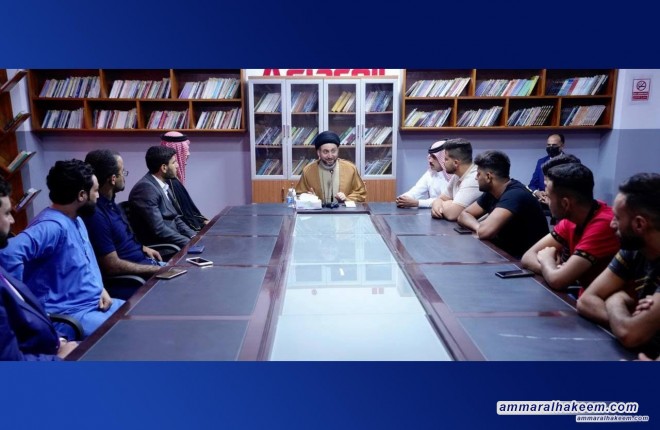 Sayyid Ammar Al-Hakeem, head of the National State Powers Alliance, met several civil society activists in Saladin province on Sunday, July 25, 2021, and praised the role of youth in building and supporting the Iraqi experience and adhering to the democratic system, indicating that young people represent two-thirds of Iraqi society and must have representation that goes in line with their population size.
His Eminence referred to the nature of the effort that was made to reduce the age of parliamentary representation from 30 years to 28 years and said that this reduction represents an important gateway and an achievement on the path to equity and empowerment of the youth.
His Eminence praised the unified language of the youth of Iraq in every part of its land and the demand for justice, provision of services, and state-building. This is due to the liberation of the youth from the past decade and its sediments. H.E. said that the reality of Iraq is not ideal and we must work to change it, calling for broad youth participation and making the forthcoming elections the youth elections par excellence and empowering the best to express them and their demands, as leadership is an influence and the leader must be influential.