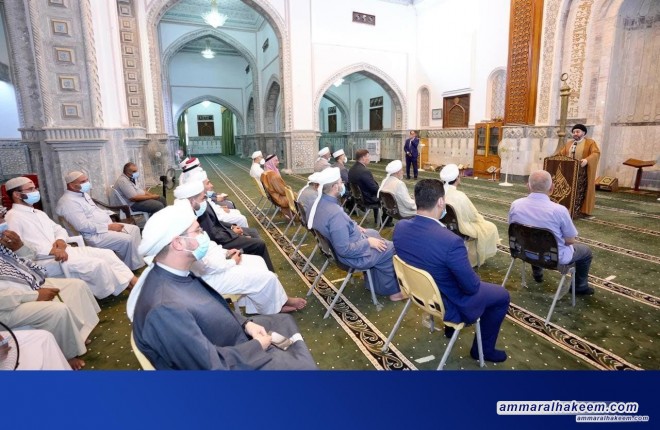 Sayyid Ammar Al-Hakeem, head of the National State Powers Alliance, met several scholars and discussed with them the challenges facing religious institutions and how to integrate among them in the service of Islam and the Iraqi people at the Great Mosque of Tikrit on Sunday, July 25, 2021.
H.E. called for triumph for Islam through fighting extremism in thought, approach and behavior and presenting the impeccable image of Islam, the religion of peace.
His Eminence indicated that the religious institution is concerned with facing challenges, calling for modernizing religious discourse and communicating with young people and bridging the gap, stressing the need to invest all capabilities in that, including modern means.
His Eminence emphasized the approach of dialogue, acceptance of the other and diversity, and we said that the cleric is a role model in his behavior, knowledge and position, stressing the dissemination of a culture of unity, rapprochement and close ranks.
Politically, His Eminence held the Sayyids Scholars responsible for urging the people to participate broadly, effectively and consciously in the upcoming elections. H.E. said that change is gradual and we must invest opportunities and give priority to national figures who put the nation's interest over any other interest.