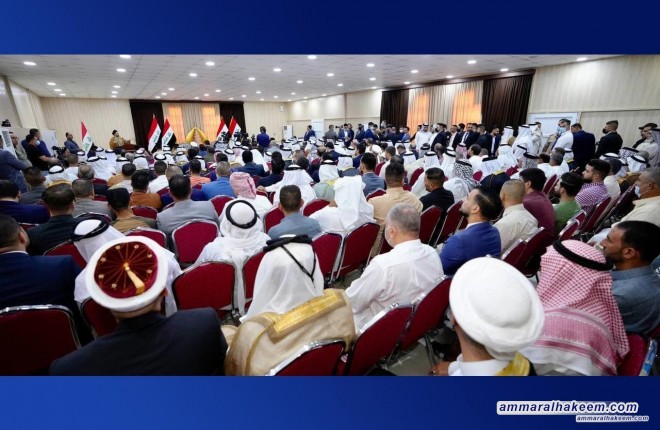 Sayyid Ammar Al-Hakeem, head of the National State Powers Alliance, said that Samarra is one of the cities enriched by history, not the one that passes unnoticed. Samarra is enormous with its gifts, history, moderation, it holding the holy Al-Askary Raudah (Haram of Imam Ali al-Hadi), and this connection with Ahl Al-Bayt (the Prophet’s family). H.E. showed during meeting sheiks and dignitaries and religion men from the city, Monday, July 26, 2021, the importance of Samarra and the challenges it faced. H.E. said "Iraq has gone through a difficult ordeal through transitioning from a centralized totalitarian system to a pluralistic democratic system, and this transition has caused many problems for internal and external reasons." indicating that despite the unity of the decision, the ease of taking it and its enforcement in totalitarian regimes. However, the fate of the country and its generations depends on the state of mind and personal whims of the ruler.
His Eminence stressed the management of diversity and said that diversity is a double-edged sword between its management and its integration if we manage it well, or rivalry and intersection if some exploit sub-identities to clash and collide, explaining that sectarianism is a political subsistence for some for electoral gain, whereas society provides evidence every day of its cohesion and homogeneity.
His Eminence stressed the need to be aware and avoid repeating mistakes and benefit from the lessons and experiences that Iraq has gone through to change its reality, holding everyone responsible for confronting change. H.E. illustrated the importance of broad, effective, and conscious participation in the elections and support for people who adopt the state’s approach, strengthening and moderating it. as well as explaining the importance of developing the economic and touristic reality of Samarra as it is one of the most important religious tourism cities in the Islamic world. Lauding how it greets its people by welcoming visitors from all over the world.