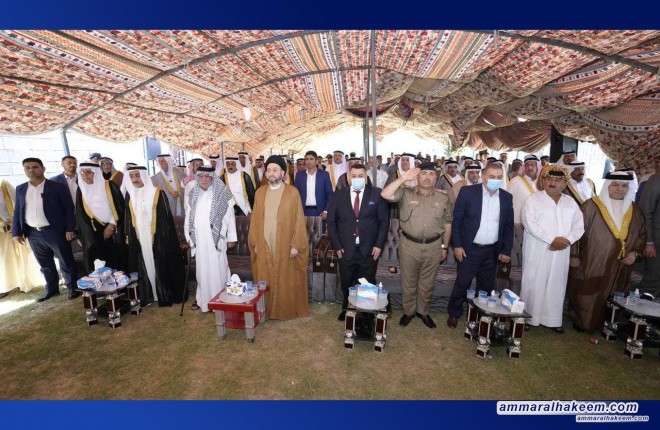 In Balad, the district of goodness and sacrifice, the Balad of a thousand martyrs, and in the framework of H.E. tour in Saladin Province, Sayyid Ammar Al-Hakeem, head of the National State Powers Alliance, met a large group of sheiks and dignitaries of the district in the guest-place of Sheik Bahjat Abdulmajeed Al-Rubaie, Monday, July 26, 2021, and praised the magnitude of the sacrifices that were made. It was made in defense of Iraq and Saladin. Balad was the first line of defense against the projects of dividing Iraq and risking its unity.
His Eminence emphasized that Iraq is going through a critical phase, in which internal and external factors contributed, indicating the nature of the inverse relationship between the strength of the political system and the strength of the external factors in influencing it and the necessity of thinking with an Iraqi mentality, seeking the Iraqi interest, closing the ranks and unifying the internal vision towards all events.
His Eminence considered the difference to be a very natural thing, but what is abnormal is the inability to manage these differences and said that the current phase represents a golden opportunity to produce a unifying national identity that respects the privacy and integrates with it without exclusion or marginalization. H.E. called for investing in a positive vision of the Iraqi situation internationally and regionally, and this vision possesses much evidence, such as the Pope's visit, the tripartite summit, the influx of many international figures to the country, and the request from Iraq to sponsor regional dialogues between the factions of the region.
His Eminence stated the fate-defining elections, and called for broad, effective, and conscious participation, holding the people of Balad responsible for choosing their real representatives in the House of Representatives to have the best representation and the best who conveys the demands and voice of his people and the people of his city to decision-making centers.