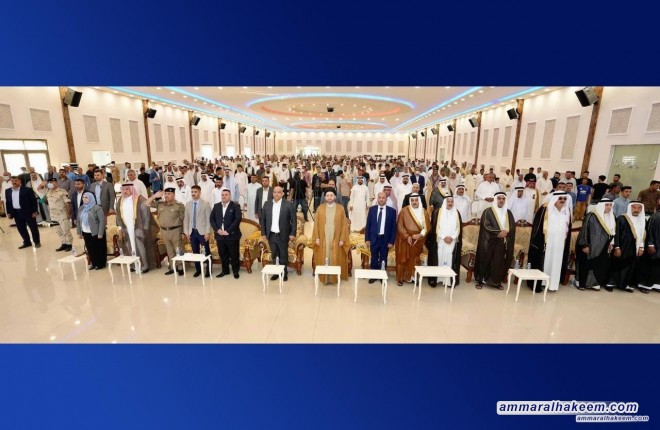 Sayyid Ammar Al-Hakeem, head of the National State Powers Alliance, met a large crowd of sheiks, dignitaries, and people of the city on Monday, July 26, 2021, and praised the stances of its people and their pride in their country and city and their stand against ISIS terrorism until blood mixed between them and their brothers from the rest of the components.
His Eminence stressed the unity of the word and said that Iraqi unity is capable of facing challenges. As evidence, the stand of all Iraqis against terrorism, indicating that differences are the gap that terrorism exploits to find an outlet through which to drive its wedge inside the Iraqi body.
His Eminence affirmed that Iraq is strong with its capabilities, the first of which is human capabilities, as well as its diverse economic and social capabilities, calling everyone to assume their responsibilities towards Iraq, reform its reality and end the period of instability it has lived through, indicating that there have been achievements made thanks to the sacrifices of its people on all aspects.
His Eminence called for the production of the Iraqi equation that is based on the Iraqi interest while maintaining communication with everyone and being open to them, stressing the need to empower the state’s powers and moderation to broadcast messages of reassurance to all to remove the wheel-block of Iraq. H.E. also called for the gift of elections similar to our gift in fighting terrorism for broad, effective, and conscious participation to achieve the desired change.