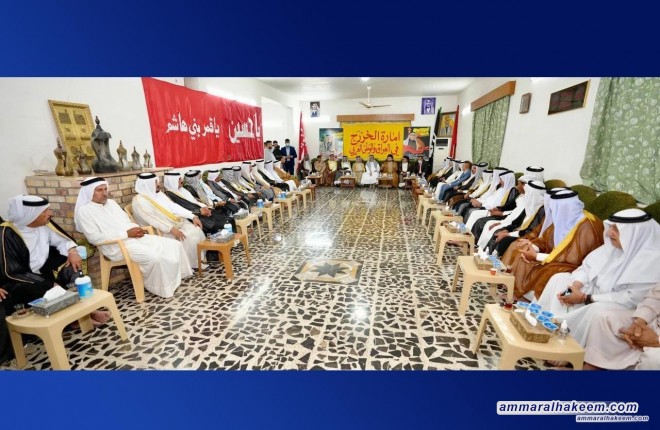 Sayyid Ammar Al-Hakeem, head of the National State Powers Alliance, visited the guest-place of Al-Khazraj tribe, the guest-place of Sheik Qais Jasim Al-Khazraji, the prince of Al-Khazraj tribes in Iraq and the Arab world, on Monday, July, 26, 2021. H.E. met several sheiks and dignitaries of Al-Dujail District and lauded the district’s people heroism, sacrifices and their love to their homeland in fighting terrorism. Also, H.E. stressed that they were among the icons of victory over ISIS, indicating the importance of unity, overcoming differences and learning from past experiences without falling a victim in them, and the importance of uniting to block the path to terrorism, which always abuses differences to enter Iraqi society.
His Eminence emphasized that sectarianism in Iraq is political, and with political factors, working to manipulate and exploit it for electoral gains. We said that the Iraqi society is cohesive and there is a level of awareness in rejecting sectarian discourse and turning people against one another. H.E. calling for conscious, broad and effective participation in the general elections, stressing the importance of this election’s results leading to the production of the Iraqi equation that is based on the Iraqi interest and internal and external balance.