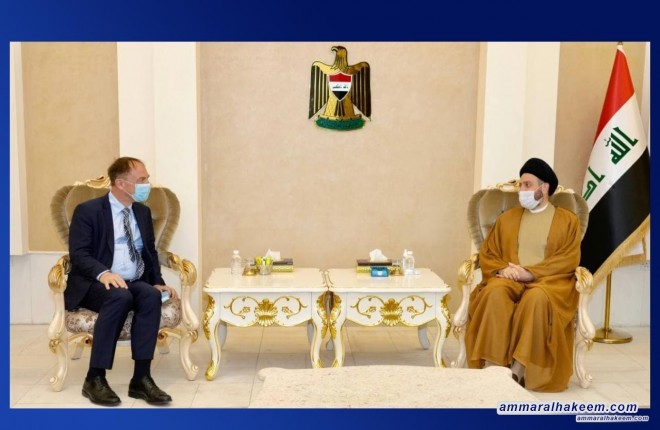 Sayyid Ammar Al-Hakeem, head of the National State Powers Alliance, received in his office in Baghdad on Thursday, July 29, 2021, the Director of the Middle East and North Africa for the German Foreign Ministry, Ambassador Christian Bock, and exchanged views on the developments of the political scene in Iraq and the region, as well as the bilateral relations between Baghdad and Berlin.
His Eminence stressed the importance of developing bilateral relations between Iraq and Germany and benefiting from the German experience in the field of reconstruction and development, calling for a greater presence of German companies to invest in the opportunities offered by Iraq in all fields.
concerning the Iraqi political reality, His Eminence addressed the electoral issue and said about how fate defining the elections are and their role in moving Iraq from a state of instability to a state of stability, indicating that this can only be done by formulating a balanced Iraqi equation with all parties.