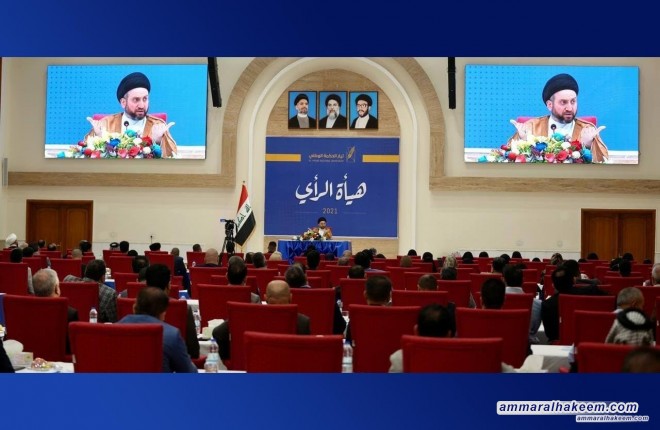 Sayyid Ammar Al-Hakeem, head of Al-Hikma National Movement, congratulated during the periodic meeting of the opinion committee in the Al-Hikma National Movement on Saturday, July 31, 2021, the opinion committee board on the 4th anniversary of the founding of Al-Hikma movement, recalling the founding steps and its obligations. H.E. stressed adhering to its principles and values, the national project, youth empowerment, diversity management, openness, and communication with everyone.
His Eminence stressed the fate-defining of the forthcoming general elections, and the necessity of holding them on their specified date, calling on everyone to adopt the making of the electoral environment, and also called for a broad, conscious, and effective participation in the forthcoming elections.
His Eminence exchanged with the members of the Commission the developments of the Iraqi political scene, stressing the importance of providing services and communicating with the public. Security-wise, H.E. called on the security forces to intensify the intelligence effort to curb attempts for terrorism to target citizens and to limit the media gain of ISIS terrorism.