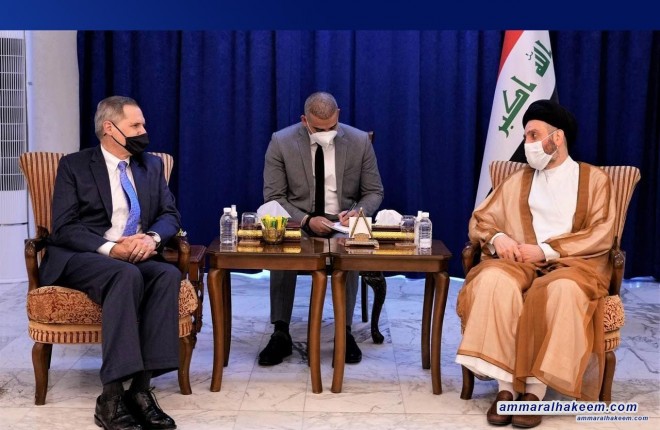 Sayyid Ammar Al-Hakeem, head of the National State Powers Alliance, received in his office in Baghdad His Excellency Matthew H. Tueller, the Ambassador of the United States of America to Iraq today, Wednesday, August 4, 2021,
H.E. emphasized strengthening bilateral relations between the two countries to serve their interests. H.E. also welcomed the outcomes of the strategic dialogue between Iraq and the United States, stressing the importance of adhering to it and working to transparently implement its provisions, most notably the withdrawal of combat forces from Iraq by the end of this year and maintaining cooperation in the field of training, consulting, intelligence and technical cooperation between the two countries, in addition to the economic, service, humanitarian, scientific and political aspects included in the agreement.
His Eminence pointed out the necessity of proceeding with the adoption of dialogue as a tool to resolve differences and spare the region the repercussions of tension and conflicts between the countries of the region.