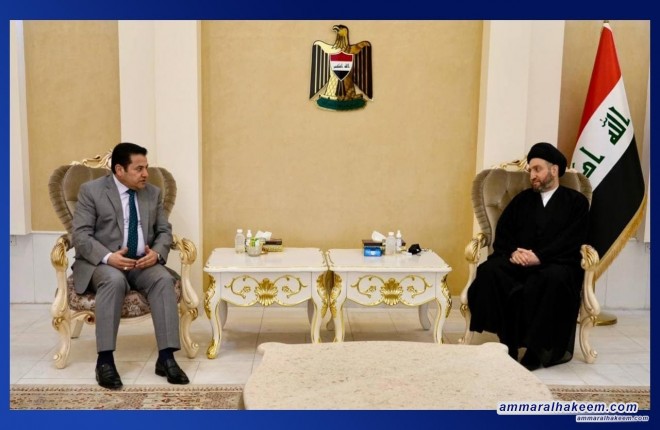 Sayyid Ammar Al-Hakeem, head of the National State Powers Alliance, received the Iraqi National Security Adviser Mr. Qasim Al-Araji today, August 26, 2021, and discussed the Iraqi political scene developments, the security status, and the challenges of the upcoming phase, in addition to preparing for early elections and creating the appropriate conditions for it.
His Eminence emphasized the importance of Baghdad’s Regional Conference for Cooperation and Partnerships which will take place in Iraq. Stating that this is yet another proof of Iraqi restoring its regional and international status, and also stated that it is imperative to face the security challenges according to security plans and programs that support and reinforce the military effort.
In regards to the elections, His Eminence stressed that the elections should be held on time and provide a positive atmosphere for the candidate and the voter alike, as well as stressing the need to compete based on programs and provide nothing but the best for the Iraqi citizen