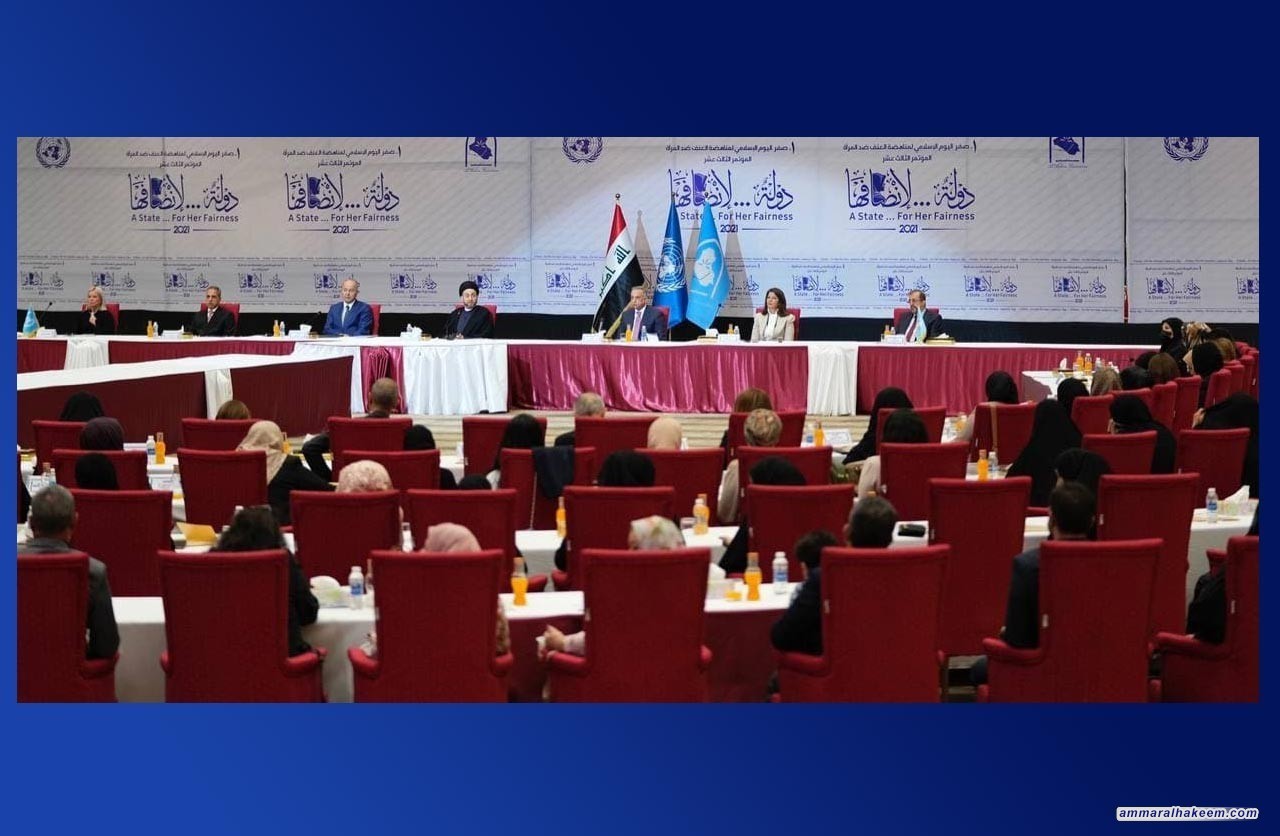 Sayyid Ammar Al-Hakeem, head of the National State Powers Alliance, stated in the 13th Islamic Day for Opposing Violence Against Women September 11, 2021:
The Iraqi elections are at closing in, and all approaches, programs, and projects are at the edge to achieve what our Iraqi people aspire to in terms of development, prosperity, and stability. Considering It a valuable opportunity to sort out an important trio that must be taken into consideration as follows:
First: Questioning the projects and slogans that are raised before the elections, and do they represent the will of the sponsoring party or are they moment-born and at the will of the electoral need only?
Second: Is it possible for someone who holds rigid or extremist ideas to become a righteous good deed-maker overnight, working to achieve what they opposed in the past?
We must not fall prey to empty slogans and flashy phrases over and over again. Rather, we must differentiate between what is well-established and rooted, and what is temporary and changing.
Concerning the third point: will the next stage be able to bear the return of traditional templates in political work with the same methods, discourse, and behavior? The opportunity has become ripe to move to a new phase characterized by stability, prosperity, urbanization, services, and openness to the world.
His Eminence showed that Iraq is in front of a great historical opportunity to overcome the accumulations of the past and differentiate between what serves the interests of our country and our people and what harms them. And we have to be decision makers and choose and take part in building this aimed-for-future calling the Iraqi woman who will have a great role in the forthcoming elections, not only in terms of candidacy, standing up, and accepting responsibility, but also in terms of interaction and participation in representation and decision-making as well.
His Eminence called to address environmental conditions, social heritage, and wrong interpretations of religious texts in the Holy Qur’an and Sunnah, and assisting the concerned authorities in carrying out their destined role to protect women from the violence they are exposed to. Stressing to Adopt a comprehensive national strategy to advance the reality of women. Informing women of their rights and the laws that protect them, and informing society of these rights and laws through school curricula and the media. And that Iraq is committed to the international treaties to which it has acceded concerning women and their rights. As well as calling to Empowering women politically by developing a political culture by setting a quota for women at the leadership levels of political entities and involving them in responsibility and decision-making positions, and management of political work Adoption of the poverty reduction strategy, focusing on women below the poverty line and increasing the financial allocations to the Social Protection Commission to ensure that social Protection includes the largest number of needy people, especially women without a provider. Empowering women economically, facilitating their entry to the labor market, training them in economic practice, and affirmative action to them in soft loans, grants, and government economic support. Facilitating government procedures in granting licenses for economic projects to the private sector and giving privacy to projects of women who have lost their providers Paying attention to women in the media and confronting the negative image that some media reflect on the weakness of women and their preoccupation with irrelevant issues, and putting an end to digital violence against women aiming to reduce their status within the processes of cyber blackmail, bargaining, and dissemination of false information. Investing in university efforts in terms of theses and studies, and developing educational curricula, and investing in the media, drama, and others to change the negative vision towards women. His Eminence Stressed on Investing in the efforts made by civil society organizations in support of combating violence against women to Implement the Yazidi Survivors Law, which provides the necessary facilities such as salaries, plots of land, and psychological rehabilitation for the survivors, and amending the law to include survivors of all components.