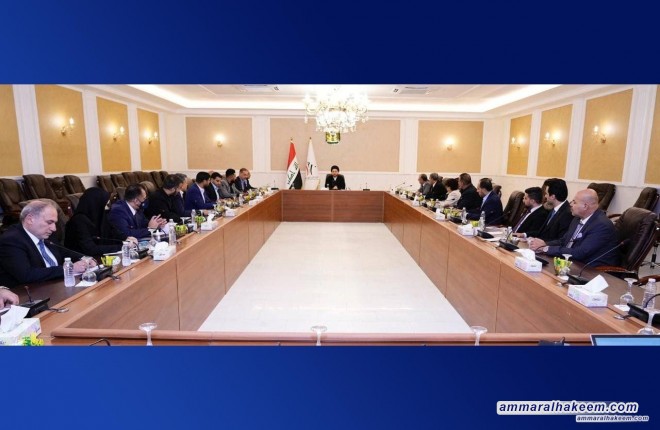 Sayyid Ammar Al-Hakeem, head of the National State Powers Alliance, chaired the Alliance’s first meeting with representatives of the affiliated Powers in the NSPA and members of the executive offices of the Alliance within the framework of the NSPA’s Secretariat on Friday, September 17, 2021, and discussed the developments of the political scene in Iraq and the forthcoming rights, especially the electoral one.
His Eminence said that the NSPA’s Alliance is a necessity in the next phase for the opportunities it presents to bring about qualitative change and regain the public’s confidence in the political system.
His Eminence stressed broad participation in the elections and indicated broad participation is an expression of the public's confidence in the political system. H.E. also stressed electoral security and freedom of the voter and candidate to express their own vision.
His Eminence said that it’s imperative to invest in NSPA’s acceptability, as it’s nationally accepted. H.E. confirmed the popular and political will to hold the elections on the specified date while stressing the need to compete based on programs.