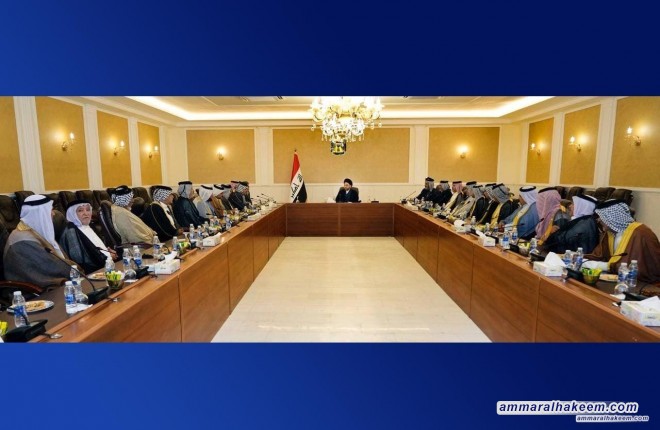 Sayyid Ammar Al-Hakeem, head of the National State Powers Alliance, met in his office in Baghdad on October 2, 2021, a group of sheiks and dignitaries of the Sheghniba clan in Al-Basra and Maysan Provinces, and recalled with them the jihadi history that he gathered with this honorable mujahid clan during the era of the Martyr of the Altar “Shaheed Al-Mihrab” and Aziz Al-Iraq, "May Allah Sanctify Their Souls".
His Eminence reiterated his supportive stance for the Iraqi clans as one of the pillars of preserving the homeland and religion after the blessed religious reference and the Husseini rituals.
His Eminence addressed the political issue in Iraq and the forthcoming elections, where he stressed the need for active, broad, and conscious participation, as the supreme religious authority stipulated in its last statement, calling on the Iraqi clans to take their role in urging people to participate and the importance of the electoral right in bringing about the desired change.
His Eminence indicated that the regions of northern Basra require large campaigns in the field of services, providing job opportunities, and taking care of the agricultural and livestock, referring to the program of NSPA, which is aware of these indicators.
His Eminence stressed the need to assume responsibility in producing a reassuring equation capable of pulling Iraq out of its recurring crises, indicating the nature of the relations that the NSPA has with all the powers on the national field and its acceptability regionally and internationally.