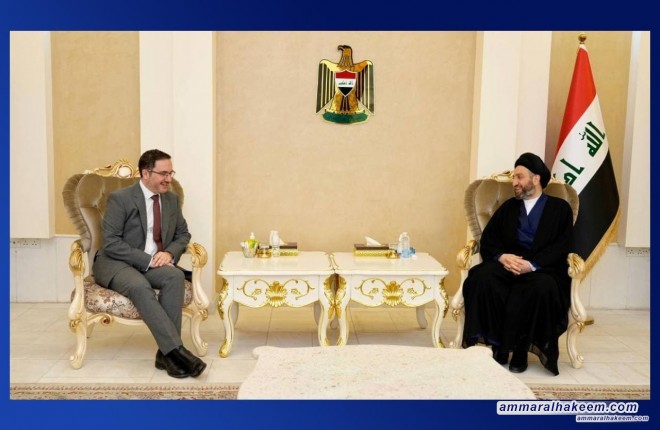 Sayyid Ammar Al-Hakeem, head of the National State Powers Alliance, exchanged with His Excellency the British Ambassador in Baghdad, Mr. Mark Bryson, views on the latest developments in Iraqi, regional and international political affairs and the ways to develop bilateral ties between Iraq and Britain to serve the interests of the two friendly countries and peoples in the political, economic, cultural and social fields on Sunday, October 3, 2021.
His Eminence emphasized the importance of Iraq being open to everyone on the grounds of national interests and preserving national sovereignty. H.E has also explained the nature of Iraq’s upcoming rights, and that this includes the forthcoming elections, and also said that Iraq is amassing its democratic experiences and that the upcoming right is crucial and fate-defining.
His Eminence has also pointed out the importance of transitioning to the phase of stability and state-building. On this context, H.E invited the national community to support Iraq, as the security of the region and world are linked to a safe and stable Iraq.