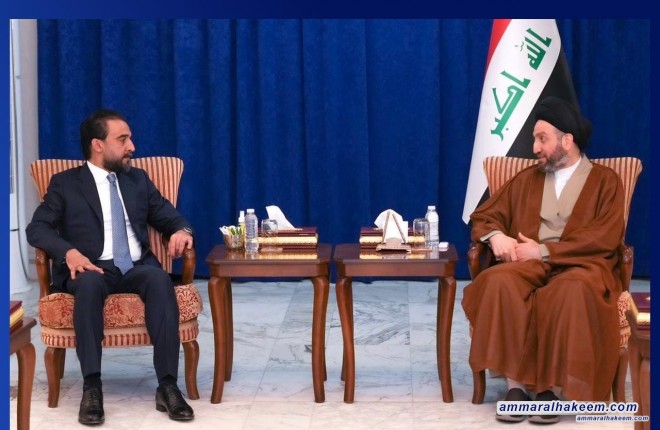 Sayyid Ammar Al-Hakeem, head of the National State Powers Alliance, discussed, during the reception of the head of Taqadum Alliance, Mr. Mohammed Al-Halbousi, on Friday, October 15, 2021, the developments of the political scene in Iraq and the parliament elections, and exchanged views of the necessary solutions for the next phase.
His Eminence affirmed the necessity of the winning blocs to join hands together to achieve the people’s aspirations and stated that the elections were made to address Iraq’s political blockage, hence the results of these elections shouldn’t be a reason for a new political blockage, and invited all to give up personal interest for public interest’s sake and said that all interests will be preserved through preservation of the public’s one, and threatened if the public’s interest was affected.
His Eminence reiterated his call for the IHEC and the judicial authority to seriously consider the appeals and complaints, and stated that taking the appeals and complaints with high seriousness and auditing every breach will result in a more transparent electoral transparency, and pave the way for Iraq’s stability, and will benefit all.