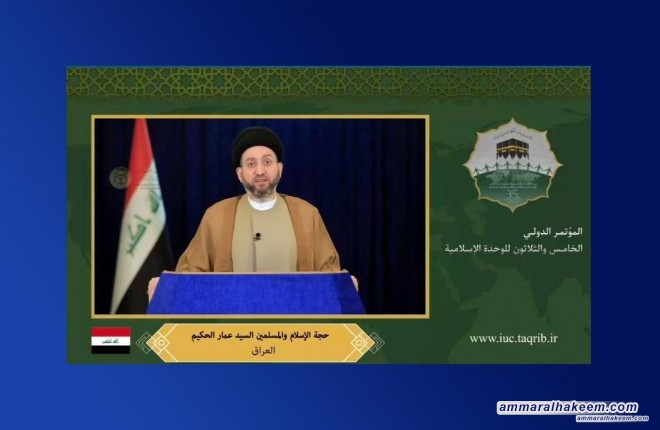 Sayyid Ammar Al-Hakeem, head of the National State Powers Alliance, stated that the united Islamic nation spreading east and west of the globe owns characteristics that qualify it to be the civilization that’s upright and preset and leading mankind. H.E. illustrated that the Islamic nation owns a rich religious heritage that’s based on the source of revelation, the message, the prophecy, and a huge sentimental repository which is missed by today’s scientists, who are in thirst for the meaning, contacting the divine, the absolute power, the spacious spiritual realms that the man belongs to and yearn to contact. In addition, its diversity feature exceeds 2 billion Muslim people, and at the same time, a young rejuvenating nation, looking forward to a better future with renewed determination.

His Eminence referred to the vast geographical area of the nation and owning natural resources and financial enough for its revival and rebuilding its states, stabilizing their homes, and taking part in a better and more prosperous future for its people especially, and mankind in general.

His Eminence, in his speech at the 35th conference of Islamic Unity held by the World Forum for Proximity of Islamic Schools of Thought, Saturday, October 23, 2021, explained the characteristics of the Islamic nation that make it a civilized and alive nation capable of advancing and participating in building the earth, strengthening religion, establishing values, dialogue and sharing with other nations for the benefit of humanity every humankind, and for a higher purpose which is to achieve human fulfillment in both worlds, the world and the hereafter together, stressing that the Islamic unity we are talking about is not a static geographical unity and is not a forced transgression of the facts and events of our history and present, as are the empires and colonial expansionist states or personal or collective ambitions, extremist and cross-border, cross-home or cross-continent. Rather, it is a value, civilized, behavioral, and spiritual unity represented in many bright aspects characterized by the unity of belief and values and belonging to Allah alone, the Almighty recognizes the privacies of peoples and nations that are Muslim and non-Muslim in their homes. And admits their nationality, language, history, and society, and preserve their right to be distinguished and stand out based on conversing with the other, acquaintance and participation in goodness and righteousness and Urbanism, away from isolation, racism, outcast fanaticism, or blind following.

His Eminence stated that acknowledging the unity of the Islamic united belief and its lofty and noble and acknowledging homes and Islamic peoples’ diversity, as well as working on reviving the Islamic open connected civilization and open for discussion with all the numerous human civilizations, all based on mutual respect and peers’ relation instead of opposition relation, this is a representation of the perfect equation that we can use to achieve our intended unitary project. H.E. expressed rejecting subordination to any other than Allah Almighty or forced subordination whether they were Muslims or not, describing the Muslim: a free human being and liberated from all subordination except for Allah Almighty, as well as solidarity in faith and a brother to all who follow his faith, flexible and open in relations with his other peers in humanity, a partner in homeland or society or the world. Explaining that what we aim for is rearranging, compiling, and organizing our Islamic religion on the scale of one nation, the various Islamic state, and the world that we want to live in and want to be the main and active partner in.

His Eminence described the Islamic unitary projects that were built based on compliments and slogans, or the demand for the predominance of one party over the other, or the efforts for the coercive political and geographical union as a failure. calling for reconsideration and aiming towards a true, civilized, stable, and effective Islamic unity that addresses past failures and opens the way to a realistic theory that is possible to implement and guarantee results. Once again, H.E. called on the sons of the Islamic nation to work on this unity and to strengthen this theory, which will be attractive to our peoples and youth and reassuring to minorities, the neighboring countries, and the world.

His Eminence explained that the great Islamic nation possesses ideas, theories, and knowledge structures that suffice it from resorting to violence, terrorism, intersection, and isolation and qualifies it for leadership, leading role and participation with others in the rebuild of the earth, the purification of souls, and the amendment of the texts necessary for this desired renaissance and the great value civilization. H.E. pointed out that our nation is waiting for us to think, theorize, mobilize, and strive to achieve its legitimate goals, aspirations, and dreams, to be in the ranks of nations, peoples, and developed countries at all levels, H.E. considering that unity built on sound foundations, will be able to rouse our peoples to resist deviation, arrogance, and targeting by the enemies of the nation, and it is the most capable of maintaining principles, faith and morals for the sons of the nation, and it is the guarantee to unify our position towards the basic issues in our Islamic world, such as the just cause of Palestine in which the brotherly Palestinian people will regain their land and their rights, no matter how long it takes.