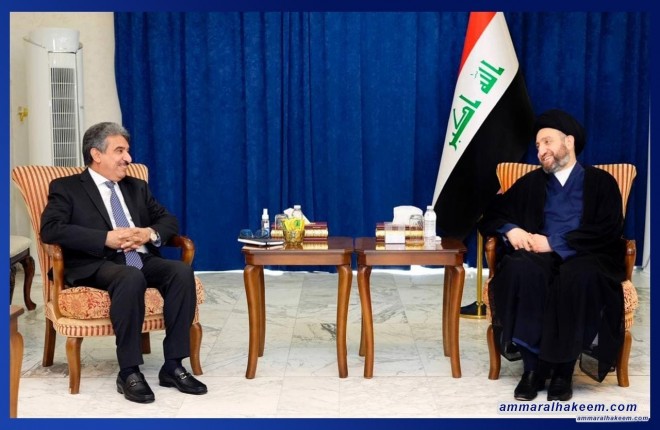 Sayyid Ammar Al-Hakeem, head of the National State Powers Alliance, stated: “Al-Kuwait is a brotherly and neighboring country that we witnessed it and its leaders supporting roles for Iraq and its people, and Iraq’s willingness to build better relations with its neighboring and regional Arab countries based on common interest and Iraq and its people’s interests that come first.”
Hos Eminence affirmed when he received the Kuwaiti Ambassador, Mr. Salim Ghasab Al-Zamanan in his office on Monday, November 8, 2021, promoting bilateral ties between the brotherly countries and ending any unresolved dispute in a way that achieves common interests.
Concerning local affairs, His Eminence called upon all of the parties to maintain calm and proceed in contribution to countries stability, reinforce the public security, and place the Iraqi people’s interest at first. It is necessary to prepare for the forthcoming stage and its important and enormous challenges, reiterating his condemnation of the attack that targeted the Iraqi Prime Minister’s house and calling for fair and transparent investigations to remove the truth’s ambiguity and reveal the perpetrators and bring them to justice to be duly punished in accordance with the law.