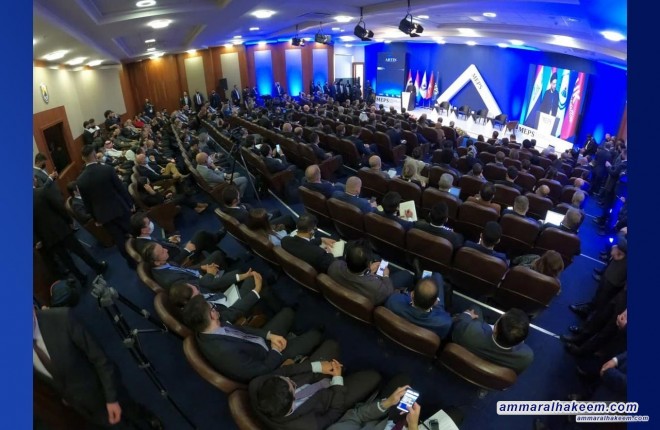 Sayyid Al-Hakeem, head of the National State Powers Alliance, called for a national political and expanded initiative that brings together the winning powers at the level of seats or votes and powers that accept or oppose the results and at the level of large powers or young and independent emerging powers, stating that Policies of imposing a political fait accompli at the expense of the citizen’s trust, the legitimacy of the system, the credibility of the state, and the legitimacy of political practice in the process of building the state, are matters that do not bring good and do not reassure the wise and the elites.

His Eminence, in his speech at the American University Peace forum in Duhok, Tuesday, November 16, 2021, called for a commitment to an independent national dialogue away from foreign interference of all kinds and parties and establishing clear mechanisms for resolving differences during and after the formation of the government, rationalize the negotiation limits by all parties and to have the highest rates of flexibility and containment to reassure all of the parties, with due respect to other parties wishes to participate, oppose, or reject the government or the parliament. H.E. pointed out the importance of dividing roles between the next government and the parliament in terms of enabling the winners in the government as well as the opponents and abstainers in parliament to find a state of political balance, and that the national agreement paper is to be voted on as a parliamentary decision in its first official session.

The political system in Iraq still suffers from many structural crises. Over the past years, the political process has not been able to leave the crisis of confidence or overcome the past decade, nor has it succeeded in adopting strategic plans implemented by successive governments to manage the state.

Reminding that Al-Hikma Movement was the first political entity to congratulate the winners of the 2021 elections, despite our possession of many evidence, documents, and questions. Changing the members of the Commission and the electoral law did not lead to broader participation of voters, which put us in front of a minority of participants, which led to a winning minority, The elections did not produce clear political balances in terms of a decisive numerical majority or close and homogeneous blocs that form a comfortable and mutually agreed majority on a solid government platform for the next four years.

H.E. called to Find a formula of understanding and cooperation to get out of the political impasse for the purpose of forming a strong and stable government capable of properly managing its responsibilities. Deal with the consequences of the current electoral process, with a serious review of the electoral law and the commission and its procedures. And this is the term for restoring trust between the public, its democratic system, state institutions, and political powers.

His Eminence sees that the peoples of the region are still suffering from a tripartite: (Tension and internal instability, fear of the future, and dissatisfaction towards the solutions and treatments offered to recurring crises). And considered the frequent crises, accumulation of tension, and loss of faith in solutions are key hinders in the path of sustainable peace and security. H.E. stressed the We are in need of a clear project to manage the diversity in our countries and use it as a point of leverage to reach the settlement of tempers and convictions within the framework of reassuring social and political pacts for all and address the roots of the gaps between states and their people on the level of (building solid institutions, fair procedures, and mutual trust).

Hos Eminence, Sayyid Al-Hakeem stated that the Iraqi citizens who lost trust in state institutions, their procedures, and its capability of preserving their dignity, present and future don’t propel towards any projects no matter how ambitious, promising, necessary, nor useful.

Adding, the deceleration of countries at the level of institutions or the fairness of procedures is one of the things that prevent cooperation and internal solidarity, and these gaps serve as a counterproductive environment yet safe for terrorism, extremism, anxiety, and frustration.

His Eminence stated that there is no security, no peace, no state, no system, no stable and coherent institutions without a real revision of this flawed and distorted reality, nor we can imagine sustainable and real peace and security for the Middle East without reconsidering the relations between the countries of the region based on openness, dialogue, and mutual respect.

H.E. urged countries to dismantle their problems in the form of specialized files, for example: (the terrorism file, the water file, the border file, the oil file, the trade file...). H.E. also called to cease the destructive regional leadership and leadership conflicts of security, military, and intelligence nature and replace them with the politics of competition and positive race towards the construction of nations and the achievement of scientific, technological, and economic leaps.

His Eminence illustrated that sovereignty and leadership need successful and rational models, far from showing muscle and temporary changing capabilities, and pointed that the foreign military incursion on the Iraqi borders, and the political interference in the internal affairs, continues to threaten the unity of the Iraqi people, and delay their right to sovereignty over their entire land, waters, and skies.

His Eminence clarified that the global warming crisis, the scarcity of rain, the absence of fair water policies, and the large desertification of agricultural lands, especially in Iraq, put us in front of a serious environmental disaster that requires effective international and regional measures that contribute to saving the universe and considered that Stability in the Middle East has become a security necessity for all countries of the world, as the effects and societal repercussions cannot be limited to a limited scope.

His Eminence stressed the need for cooperative regional councils that are aware of the danger of future repercussions. The climate crisis, economic changes, societal and security challenges make it difficult for any government to achieve success alone without effective regional coordination and cooperation.