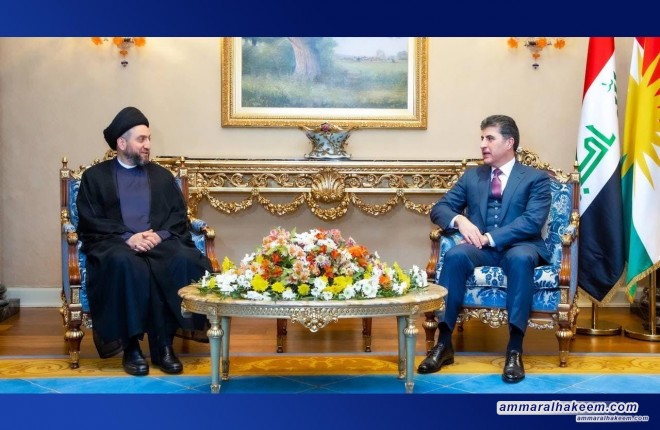 Sayyid Ammar Al-Hakeem, head of the National State Powers Alliance, during visiting the Kurdistan Region, met with the President of the Region, Mr. Nechirvan Barzani on Wednesday, November 14, 2021, and discussed with him the developments of the political scene, the results of the recent elections and their impact on the Iraqi reality, and discussed the relationship between Baghdad and Erbil and the challenges of combating terrorism.
His Eminence illustrated the importance of considering appeals and complaints, especially since the file of appeals is now in the hands of the judiciary, as reviewing it leads to the transparency of the elections and restores trust in the political and democratic system in the country. H.E. also emphasized that Al-Hikma Movement is putting forward the initiative at a time when it tends not to participate in the next government.
Concerning the relationship between Baghdad and Erbil, H.E. stressed the necessity of solving outstanding problems and resolving this file in accordance with the constitution, the laws in force, and the necessities of the public interest, and we said that solutions need executive and legislative measures to implement them.
His Eminence pointed out that terrorism still poses a security threat, thus requiring everyone’s cooperation to defeat it and prevent it from returning or exploiting any loophole for media and military gain, and illustrated that the Iraqis have proven that national unity is the most powerful tool in our arsenal in the face of terrorism.