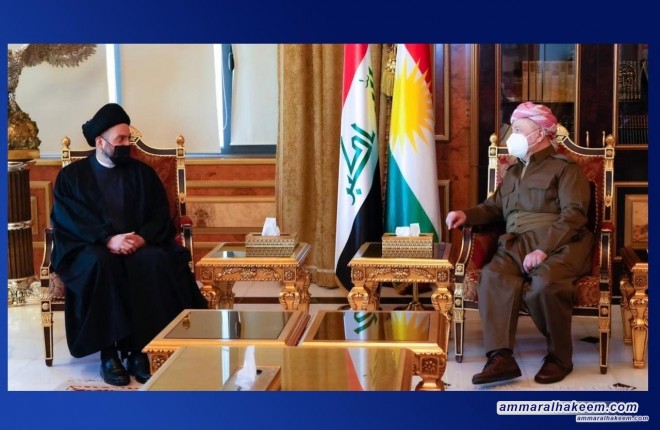 Sayyid Ammar Al-Hakeem, head of the National State Powers Alliance, met Mr. Masoud Barzani, head of the Kurdistan Democratic Party on Wednesday, 17 November, 2021, and recalled the common history that he had with his sovereignty and with the Kurdish leaders in confronting dictatorship and building the new Iraq. H.E. also discussed the developments of the political and security scene, the results of the recent elections, and the confusion and imbalance that the elections caused.
His Eminence called to reassure the parties objecting to the results to restore transparency and confidence in the democratic system, and stressed with his sovereignty on pacification and dialogue to avert the current crisis and avoid a political impasse.
His Eminence stressed the importance of conceding in favor of Iraq and the public interest, and the importance of forming a government capable of achieving the aspirations of the Iraqi people in terms of services and job opportunities and addressing unresolved issues and this phase and of previous ones. H.E. said that Iraq's stability depends on the leaders' spirit of conceding to Iraq and the interest of its people, and indicated that the national initiative that was presented represents “our vision” to resolve the current crisis without asking for a role in the next government.
Politically, His Eminence emphasized respect for Iraq's sovereignty and ending foreign interference and aggression on its lands, and said that Baghdad's strength is strength for Erbil and vice versa, and this is what previous experiences have proven.
His Eminence thanked the brothers in Kurdistan for the warm reception and generous hospitality, and wished our Kurdish people further progress and prosperity and the rest of the people of the Iraqi nation.