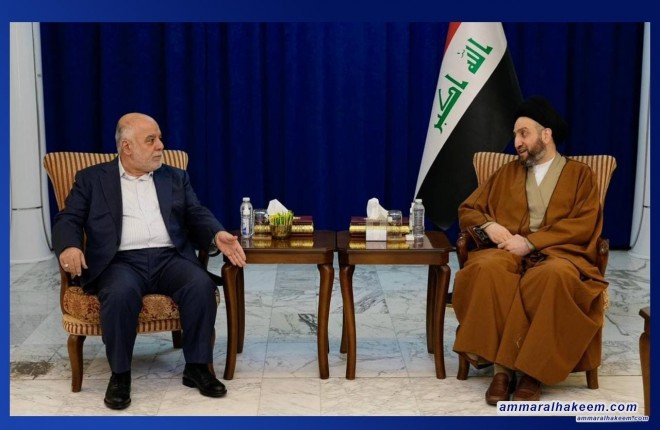 Sayyid Al-Hakeem, head of the National State Powers Alliance, received in his office in Baghdad Dr. Haider al-Abadi, Chairman of the Leadership Council of the Alliance and his accompanying delegation, on Wednesday, 1 December 2021, and discussed with him the developments of the political situation and the results of the parliamentary elections.
His Eminence and Dr. Al-Abadi stressed the importance of forming a servant government capable of achieving the aspirations of the Iraqi people and advancing the reality of service and job opportunities. They also called for avoiding political impasse due to its significant impact on widening the rift between citizens and their political system and further undermining confidence in the democratic system.
His Eminence called on the Federal Court to seriously consider the submitted appeals before approving the results of the elections and to give justice to the objecting Powers. H.E. stated that everyone must give priority to the national interest and to consider the interests of citizens aspiring to improve their living and service reality and stressed that everyone is a winner if Iraq wins and overcome the current crisis.