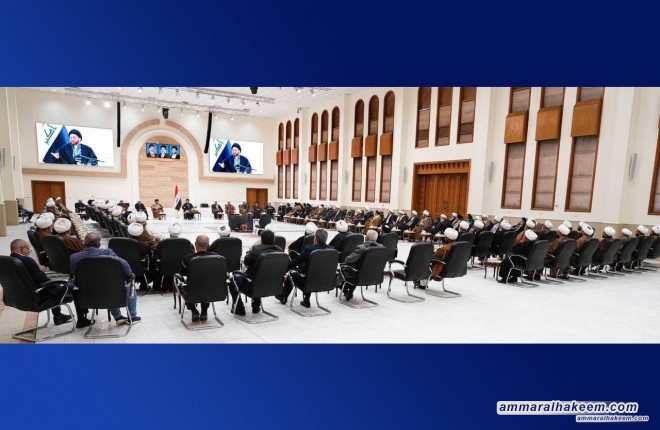 Sayyid Ammar Al-Hakeem, head of the National State Powers Alliance received the genuine religious orators from Shaheed Al-Mihrab Foundation (May Allah Sanctify his Soul) on Wednesday, December 15, 2021, and expressed joy for meeting them and listening to their valuable inputs, as well as discussed with them the developments of the cultural, social, and political affairs in Iraq.
His Eminence emphasized a few major points, most of which are the religious institutions and men have a vital role in enhancing societal cohesion and addressing social, political, cultural, and deviation issues, communicating with people to dismantle it, and raising awareness on its danger. H.E. called to update religious discourse tools to be up to date on the current situation and achieve the desired objective.
Politically: His Eminence stressed the interest of Iraq and Iraqis as a top priority. This can be achieved through compromising and finding a middle ground to form a government that is capable of overcoming the challenges of the upcoming phase. H.E. emphasized achieving balance in all fields to avoid a political impasse and achieve stability as the first and most important step and to serve our people.
His Eminence reiterated his call upon the Federal Court to objectively consider the appeals and make the necessary resolutions to assure the objectors and winners, urging the reverend Sayyids and distinguished sheiks to have bigger roles in many social, cultural, and orating levels. H.E. also thanked their attending endeavors.