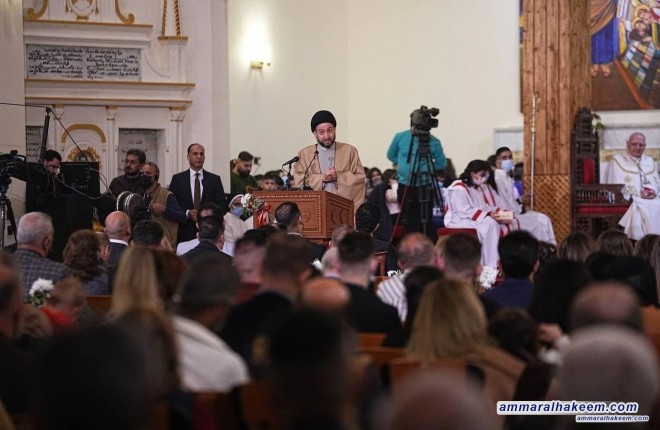 Within the framework of His Eminence Sayyid Ammar Al-Hakeem, head of the National State Powers Alliance to connect with our Christian brothers and congratulate them over the Christmas holidays, where H.E. visited several churches in Baghdad some of which were, the Eastern Church, Mar Gorgis Chaldean Church, the Christian Evangelical Union Church, the National Evangelical Protestant Church, and Saidat Al-Zuhoor (Flower Lady) Church on Saturday, December 25, 2021.
His Eminence congratulated them and the world on the blessed birth of Lord Christ (Allah peace and blessing be upon him and our prophet) and wished them happy holidays. H.E. illustrated that the Lord Christ is for all humanity as his message was about peace and love.
His Eminence pointed out the commonalities between Christians and Muslims, stressed enhancing them, and establishing a unified national identity as everyone can be protected within it.
His Eminence illustrated that Iraq has come a long way in terms of stability as we woke up from the security nightmare. Reconstruction, services, and achieving prosperity and stability is the most important thing at this stage. How we must learn from mistakes, as it’s not wrong in doing so while it’s wrong to repeat them and not overcome them.
His Eminence stressed managing diversity and stated that Iraqis are diverse. Thus, requiring us to manage it. Diversification is a source of enrichment for the Iraqi society and building the Iraqi nation.
His Eminence stated that taking pride in sub-identities is acceptable as long as it doesn’t overcome the national identity. Terrorism abuse differences based on sub-identities, it has infiltrated and targeted Muslims and Christians alike. We called upon all Christians to voluntarily return to aid in building their country.
His Eminence pointed to the way Muslims see Christians and how the Holy Quranic verses mentioned Virgin Mary (PBUH) 24 times. This is clear evidence of how the Quran and Islam cherished Lord Christ and his humanitarian message. Not to mention the numerous historic evidence of cooperation and cohesion between Muslims and Christians in our country through adversities.