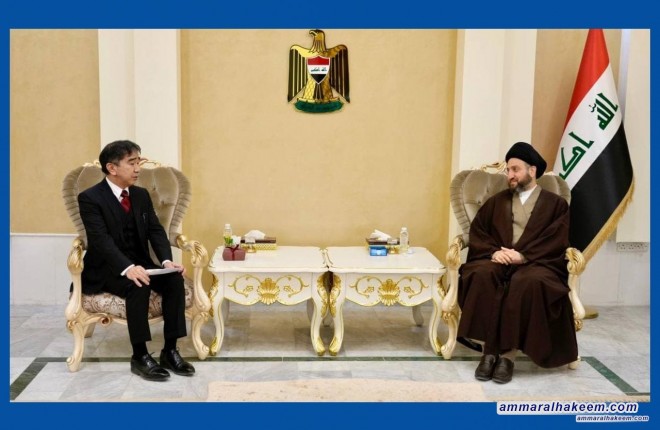 Sayyid Ammar Al-Hakeem, head of the National State Powers Alliance, called to form a government that serves the people and works in priorities.
His Eminence met Japan’s Ambassador to Iraq, His Excellency Kotaro Suzuki on Wednesday, 29 December 2021, and discussed with him enhancing the bilateral relations between Baghdad and Tokyo and the importance of learning from the Japanese expertise in reconstruction and development.
His Eminence discussed views with Mr. Suzuki over the political scene developments in Iraq and the results of the recent elections, and the validation of the elections by the Supreme Federal Court.  Reiterating his adherence to the ruling despite our reservations over the results, and the strong beliefs of fraud and manipulation.
His Eminence called to haste the formation of a government that’s the main theme of is serving the people, providing services and jobs, and preserving the sovereignty of the country with emphasis on priorities. We reiterated our position of withdrawing from the government and keeping the role of Al-Hikma National Movement active in converging the political factions and their views.