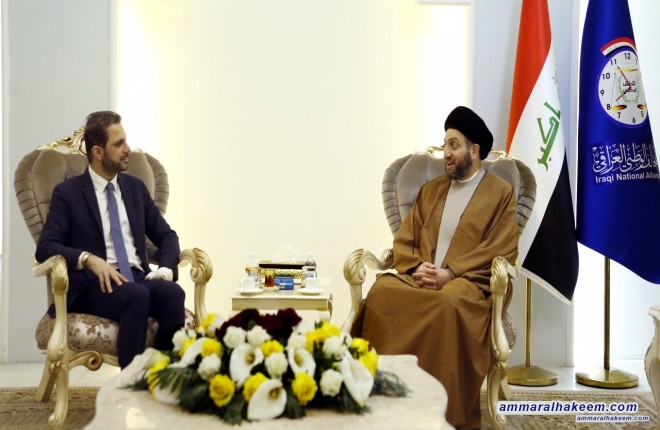 Head of the National Iraqi Alliance, Sayyid Ammar al-Hakim, in his Baghdad office met head of New Generation Movement, Mr. Shaswar Abdulwahid Thursday 14/12/2017
His Eminence with Abdulwahid discussed prospects of dialogue between Baghdad and Erbil to end the current crisis. His eminence stressed the importance of adhering to the Constitution in letter and spirit as expressed by the religious authority, as well as abidance to the laws and decisions of the Federal Court. His eminence indicated that a solution exists only if there is a will to solve the problem and favor public interest over private individual interests.
His eminence reiterated the importance of preserving the rights of all citizens. There is no difference between Iraqis, all Iraq's wealth belongs to the Iraqi people and is divided equally., pointed out that the regional and international situation and challenges of terrorism decisively prove that the interest of all is in a unified and strong Iraq away from the policy of axis.
His eminence stressed that the military victories achieved on terrorism, the restoration of sovereignty as Iraq is out from Chapter VII of the United Nations Charter is in the interest of all, these victories are made by the sacrifices of all. His eminence pointed to the importance of peaceful coexistence between the components and forget the past, especially in some joint areas, including the city of TuzKhermato, everyone are reliable to control crises and defend the victories achieved because it were accomplished with blood, patience, tears, orphans and bereaved mothers.
Sayyid Ammar al-Hakim that the next phase is the stage of national majority in which all Iraqi components are present, stressed on empowerment of young people in the next phase to equilibrate political representation with the community reality.
Mr. Abdulwahid congratulated convening of the founding conference of the Al-Hikma National Movement and electing Sayiid Ammar al-Hakim as head of the current, plus election of the Political Bureau and other details that were conducted in a public transparent way, indicated the importance of resorting to dialogue to resolve the unsettled problems between the federal government and the Kurdistan Regional Government of Iraq.