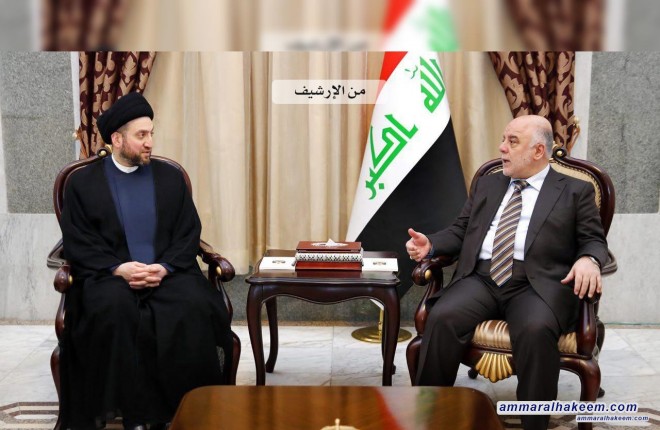 Head of the National Iraqi Alliance, Sayyid Ammar al-Hakim, met Sunday with Prime Minister Mr. Haider al-Abadi 31/12/2017, his eminence with Abadi discussed the upcoming elections and the need to adhere to constitutional timing of elections.
His eminence stressed that the elections are the most important pillars of democratic system, abide by the Constitution and the law, called for securing all elements of the success to the electoral process, like resettlement of displaced people and provision of services, pointed out that Iraq has performed electoral practice during more difficult circumstances.
Regarding the crisis of the federal government and the government of Erbil, his eminence indicated that the crisis will be only resolved through constructive dialogue based on the Constitution and the law in force, pointed to the importance of sacrifice to Iraq and to serve the Iraqi citizen everywhere.
His eminence pointed to Iraq's military and political victories, pointed out that Iraq is facing another challenge and must be prevailed, the challenge of services and building the state, called for selecting the competent people who are able to provide service with the available resources. The meeting discussed demands of Karrada residents that were forwarded during his eminence previous visit to Karrada area Local Council.