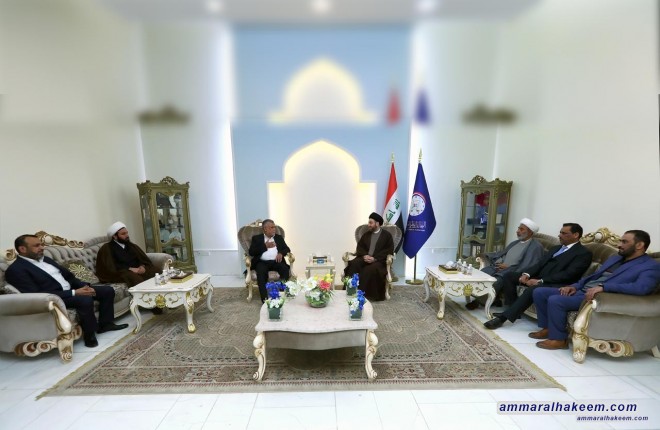 Head of the National Iraqi Alliance, Sayyid Ammar al-Hakim, in his office in Baghdad received delegation of AL-Fatih Coalition led by Mr. Hadi al-Amiri and a number of leaders in the coalition Tuesday 16/1/2018
Sayyid Ammar al-Hakim discussed forming proper atmosphere for the upcoming elections and emphasized on performing the election on schedule, stressed the importance of closer relations between the electoral coalitions and maintaining these relations, emphasized on entering elections according to realistic electoral plans based on priorities, which takes into account the challenges of the current phase, called to realign to face the state-building challenge and service provision that are necessary for Iraq, otherwise all political, military and societal victories will be incomplete, called forming un-biased alliances and creating the proper climate for the national majority government that will eliminate quotas and issues experienced by the country.
Mr. Amiri and accompanying delegation praised the great efforts exerted by Sayyid Ammar Al-Hakim in convergence of visions, the status of his eminence in the political process and the qualitative role he played in various stages. Mr. Amiri referred to the role of the Al-Hikma National Movement, and the importance of coordination among the electoral coalitions. Mr. Amiri emphasized rejecting attempts of defamation and toppling that accompanied recent efforts of introducing coalitions.