Meeting the National Youth Council and the Himam Students Gathering in Diwaniyah, Sayyid Ammar al-Hakim calls on young people to be confident and take initiatives 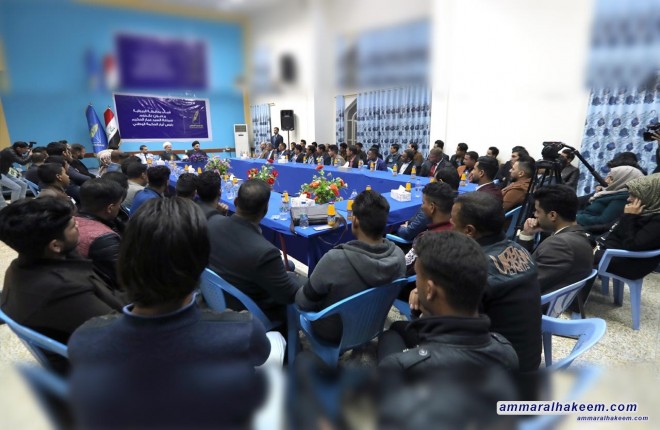 Head of the National Iraqi Alliance, Sayyid Ammar al-Hakim, in Diwaniyah, met the National Youth Council and the Himam Student Gathering Thursday 18/1/2018
His eminence urged young people to show high confidence, take roles and initiatives and invest their young age in training and development making success stories in every aspect of life.
His eminence pointed out that the Iraqi society is a young society based on the official population census percentage issued by the official bodies, pointed out the importance of modernizing discourse in commensurate to the Iraqi community reality, noted the importance of communicating and listening to people in various ways to remove frustration that some people feel.
His eminence indicated that there are accomplished goals and other goals that were not achieved due to the events and obstacles, stressed to focus on pros and introduce the people to the Al-Hikma National Movement project, which proved its credibility in giving roles to young people in the General Conference and the Political Bureau and some other important sections, noted that members of the Al-Hikma movement should be influential, convincing and be convinced as well.