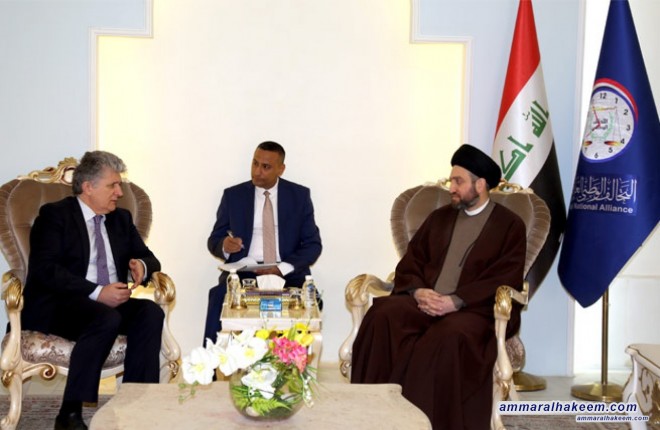 Head of the National Iraqi Alliance, Sayyid Ammar al-Hakim, at his Baghdad office, received Assistant Secretary-General of the United Nations for Political Affairs, Mr. Miroslav Jenča accompanied by the Representative of the Secretary-General in Baghdad, Mr. Jan Kubis, discussions covered the required support to Iraq at the forthcoming donor conference to be hosted by Kuwait next month, his eminence expressed his optimism regarding the national alliances that took place between the political blocs for being cross-components titles that qualify them to produce the government of the national majority and the national opposition, called on the international community to support Iraq in the issue of resettlement of displaced people.
His eminence appreciated United Nation’s efforts in supporting the Iraqi government and people, pointed out the importance of equality in reconstruction towards the Iraqi cities including liberated cities from the cities from Daesh and the cities liberators who have offered their material and human resources to liberate the cities, pointed that Iraq has won the military challenge with the terrorist Daesh, won the challenge of national unity and won societally as the Iraqi people overcame sectarianism and narrow tendencies, stressed that Iraq needs the support of the United Nations to succeed in the challenge of building the state and institutions to be a culmination of the victories achieved.
His eminence reiterated his call to proceed with the national settlement project, pointed Iraq’s need to consolidate social harmony and political stability, which requires proceeding with the project, called upon United Nations to support Iraq in consolidation of democracy, considered performing elections on its due date a key factor to maintain victories. His eminence appreciated the United Nations’ stand that called to respect the constitutional timing of elections plus its constant support to the High Indented Electoral Commission.
His eminence praised the stand of the United Nations that called to resolve the dispute between Baghdad and Erbil through dialogue and adherence to the Constitution, his eminence called on the international community and the United Nations to support Iraq in resettlement of displaced people to their homes and provide conditions of stability to participate in the elections and the selecting their representatives.
The Assistant Secretary-General of the United Nations commended the victories achieved by Iraq, expressed the solidarity of the United Nations with the displaced people issue and the necessity of their resettlement and participation in the elections and the reconstruction of cities, and commended the role played by his eminence in national reconciliation, confrontation of sectarianism and adherence to the unity of Iraq, expressed the support of the United Nations to Iraq at the forthcoming donor conference in Kuwait.