Sayyid Ammar al-Hakim from Wasit: We raised the slogan of patriotism to join together in support of the homeland and its people of all components 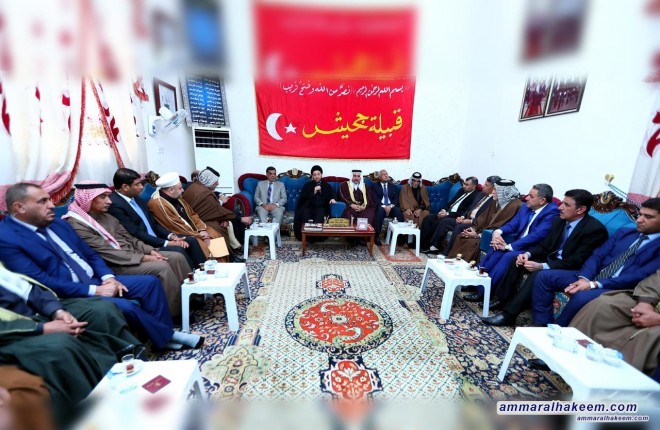 Head of the National Iraqi Alliance, Sayyid Ammar al-Hakim, met with Chieftain of the al-Juhaish tribe, Sheikh Adnan al-Juhaishi at the latter's guest house, the AL-Suwaira of Wasit Thursday 1/2/2018
His eminence indicated that Al-Hikma National Movement is open to all components of Iraq, which proof the national approach espoused by the movement in order to serve country's people, unite their lines and strengthen their unity.
His eminence stressed that Wasit province has a remarkable spot in history and great achievements in the past, present and future, indicated that the great Iraq acquires its greatness out of diversity and the deep roots of relations between the sons of Iraq.
His eminence pointed out that the relations with these noble areas is not a newborn relationship, but its roots extend to the Imam al-Hakim (sanctify his soul), who was in contact with the tribes and clans, and added “today we are here to renew the covenant to join together and put a hand in hand. Iraq needs all its sons and we are unable to build the nation only when we become one line and one will”. His eminence indicated that these noble tribes and Suwaira areas faced issues and inconveniences, and were targeted by terrorism during the past hard years, but the wisdom and wit of the areas sons was able to stand up to these extremist groups and restore security and stability.
His eminence stressed that the Al-Hikma National Movement raised the slogan of patriotism and opened the doors for all, and there are leaders from different sects, ethnicities and different regions, and added “the alliance which we are consolidating and strengthening with the tribes of Al-Juhaish and our brother Sheikh Adnan is at the front of this alliance and expresses these genuine national trends that unite us in one project for this beloved homeland and we manage together, we work together, support each other and join forces to support the homeland and its sons and citizens.
His eminence stressed the importance of all people’s support, from the center and south, to solve the problems of northern Iraq and in return the support of northern region to the south and center of Iraq, pointed to the importance of considering the real interest of the people and agreeing on brotherhood, coexistence and love among the sons of one country.