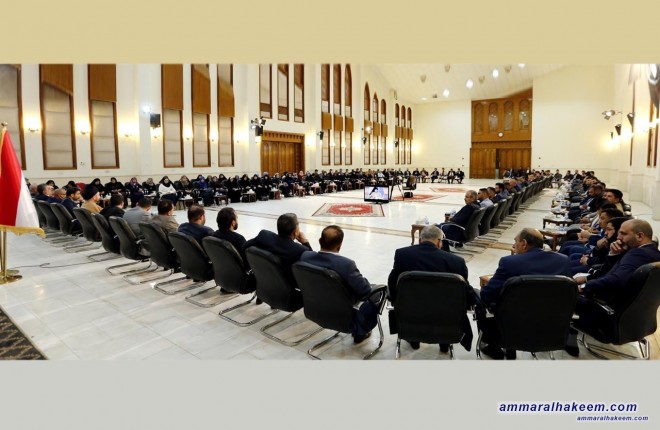 Head of the National Iraqi Alliance, Sayyid Ammar al-Hakim, received a group of youth competencies, in his office in Baghdad Monday 5/2/2018.
His eminence indicated that the 2018 elections will be important and turning point that will shift Iraq from a state of instability to a state of stability, and consolidation of democracy in Iraq, indicated that 2018 elections is very important as the 2005 elections.
His eminence explained the importance of electoral competition basing on programs and controlling toppling of others everyone in which will lead to voter mistrust towards all runners, called for wisely elect and the select those able to get Iraq out of its current crises and enable Iraq to win the fourth challenge, the challenge of building the state to make this victory the culmination of political, military and societal victories.
Regarding counter terrorism, his eminence indicated that battle of Iraq against terrorism is a long battle despite the military victory, because of the existence of extremist ideology and the existence of terrorist sleeper-cells,
pointed out the importance of comprehensive solutions of terrorism on social, economic and security levels and to address the psychological effects resulting from the Daesh occupation of vast areas of the Iraqi soil.