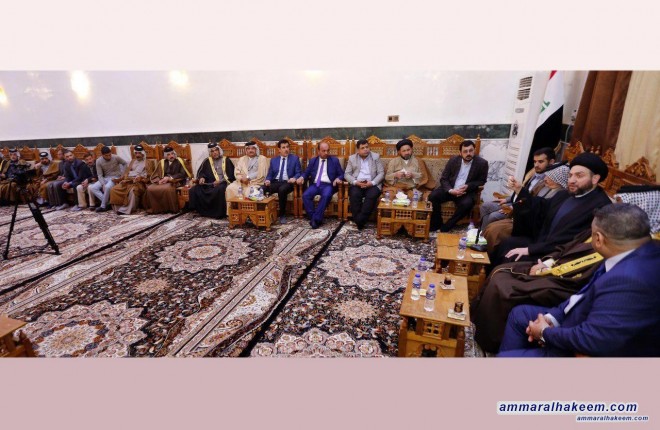 Head of the National Iraqi Alliance, Sayyid Ammar al-Hakim, in a speech at guest houses of the chieftain of the Bani Kaab tribe Sheikh Khaled Jabr al-Kaabi and Sheikh Ali al-Sha'lan tribal chief of Albudaraj tribes in Maysan province Wednesday 14/2/2018, indicated that the wide international participation in the Kuwait Confrence for Reconstruction of Iraq reflects the strength of Iraq and victory in exiting from the bottleneck, emphasized that the country is going through a historic moment and it is imperative to choose the team that has the vision and the plan to build the state in the next phase.
His eminence praised the noble tribes that responded to the religious authority, fought against dictatorship, supported the political process, the Constitution and the electoral process, pointed out to the great role of the Bani Ka'ab tribe and other Iraqi tribes in the face of Daesh terrorism and offering of its youth sons in defending the country.

His eminence stressed the need to confront the Daesh extrimist ideology and eliminating of sleeper-cells, after the black flag presence ended throughout the entire country, which was achieved by Iraqis courage and chevarly which is a great achievement.
His eminence indicated that Iraq has won the military challenge against Daesh, and defeted sectarianism and achieved a societal victory by consolidating unity, and today everyone and on all levels are talking about the national project after the project was absent from the political arena, which is an important achievement and development. Iraq also won on the politacal level maintained its soil integrity, and these victories were achieved in a short period of time considering that each of these challenges actually needs long period of time in other countries.
His pointed out that the state should work to end the crisis of water scarcity by building projects and water reserves and water rationalizing to be used in irrigation and agriculture through mechanization and drip irrigation, stressed the importance of finding negotiating strengthes with the riparian countries with Iraq and the underground water the infinite resource of water that will contribute in controling water scarcity.
His eminence concluded his speech by emphasizing on that Iraq is going through an important stage, describing it a historical moment. The people should choose the team that has the vision and the plan to build the state, because the countries are not built by wishes, slogans and words, but by real programs.