Sayyid Ammar al-Hakim from Muthanna province: Iraq is passing through a historic stage and must leave despairation 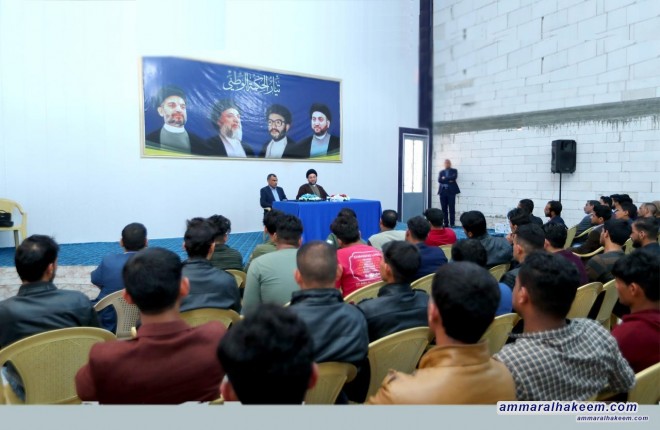 Head of the National Iraqi Alliance, Sayyid Ammar al-Hakim, met with a group of youth and agencies of Muthanna province Wednesday, 21/2/2018, stressed the need to prepare for the state-building challenge and not to surrender to despair, emphasized that Iraq is at a historical stage after achieving great victories on Daesh, sectarianism and division.
His eminence pointed out that depending on youth will restore confidence in youth and their role and will achieve great achievements that seem impossible, the Al-Hikma National Movement had gave roles for young people and enabled them to work, empowered and supported women, today the Al-Hikma National Movement have skilled women working efficiently, considering that women's empowerment is an important priority.
His eminence pointed out that the strong Iraq and the strong state will not be found without the national project, explained that basing on this point the Al-Hikma National Movement gathered all the components and spectrum of the Iraqi people, and were involved in the decision making, and output indicated their keenness to the interest of the country.
His eminence urged motivating the people and leaving despairation, own the required mettle, and raise the capacity to face the challenges and to work for the success of a project in order to build the state, especially that Iraq today is closer to success than ever after the great victories achieved in the war against Daesh and controlling sectarianism and preserving the unity of the country.
His eminence emphasized that the country is going through a historic moment to build the state, but needs a stand and effort, stressed the need to break the nactivity and despair, especially among young Iraqis and empower their capacities to contribute in the advancement of the country through hard work and to achieve a promising successful project.